After Sekiguchi runs across a strange story he intends to publish for his supernatural-fueled tabloid, he soon finds it contains more horrific truth than he can wrap his head around. With the help of his clever and well-read friend Kyogokudo, he delves deeper and deeper into the mystery, a trajectory which will have him questioning his sanity, metaphysics and the overlap of Reality with the supernatural realm. This was the first novel by one of Japan’s up and coming Mystery/Horror authors, Natsuhiko Kyogoku. 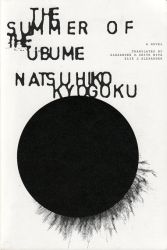 It has been said that author Natsuhiko Kyogoku has created a new sub-genre within the Mystery / Horror spectrum, a claim I now find quite believable. Rather than utilize supernatural trappings as mere props in an otherwise secular procedural, Natsuhiko’s characters are confronted with making sense of the role of ancient superstitions in the contemporary world. To say that such superstitions are taken seriously would be an understatement, but they are not handled or approached as mere ghost tales. Natsuhiko repeatedly refers to what he calls “folklore society”, a specific time, place and social mentality wherein the traditional ghosts and demons of Japan thrived in people’s minds and lore. Only through identifying and exploring contemporary remnants of the earlier “folklore society” can the mystery such as that faced by Natsuhiko’s characters be understood to the point of “resolution”. Thus in addition to containing a truly strange scenario set in modern times, the book is rife with literary and historical references dating back to the Early Edo Era (1600s) of Japan’s leading authors and literature recording these ancient legends and ghost tales.

For someone with an interest in the historicity of such supernatural tales, the footnotes alone open up rich options for further reading. Names of early authors, titles and subject matter are repeated dropped throughout the characters’ dialogue, alongside often lengthy discussion of their impact and meaning both to early “folklore society” audiences and those in a more skeptical modernity. It is clear that author Kyogoku has spent a vast amount of time perusing these old texts, evidenced by the way in which he interweaves not only the ancient tales but their modern implications into the whole of the narrative and characters’ personas. This treatment of the ancient Kaidan, all the while keeping readers thoroughly immersed in a contemporary mindset, makes for a very interesting and unique approach. 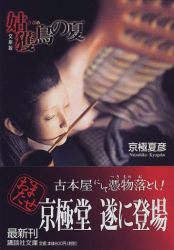 The Summer of the Ubume is set in 1952 in the northwest outskirts of Tokyo. The tale’s setting and proximity to the end of the war (1945) allows readers to see parallels between the city’s slow reconstruction and transition from pre-war to post-war and the central theme of the overlap between “folklore” and modern mindsets. As it happens, our characters inhabit a less influential quarter of Tokyo described as littered with a crumbling, bombed out infrastructure and economy. The slow emergence of new life and construction amidst an otherwise charred environment mirrors our characters’ eventual coming-to-terms in their modern mindset with more ancient often horrific possibilities.

Though the book’s main character is undoubtedly Sekiguchi, a part-time writer for the popular, often sleazy tabloids of the time, the solution to the mystery he encounters is only possible through the historical insight and analysis of his enigmatic friend Akihiko “Kyogokudo” Chuzenji. The character of Chuzenji (aka Kyogokudo) appears in several of Kyogoku’s novels in the role of investigator extraordinaire. In all his appearances Chuzenji is owner of an esoteric used bookstore and does nothing with his time but read ancient texts involving folklore, superstition and onmyodo magic. He is also an onmyoji priest, trained in the esoteric arts which permeate ancient Shinto and folklore mindsets. He is thus NOT your typical investigator, and his frequent recourse to supernatural precedent in the face of mind-boggling scenarios often has the police themselves aggravated, confused and frustrated. But by narrative’s end, readers, police and onlookers alike will be forced to admit that something akin to ancient supernaturalism is at work in their midst.

In the world of Japanese mystery novels there are other “investigators extraordinaire”, perhaps the most famous of which is Kindaichi Kosuke appearing in the novels of Seishi Yokomizo (1902 – 1981). At least 45 films have been based on Yokomizo’s novels, many dedicated to the mystery solving prowess of Kindaichi, the most recent perhaps being The Inugami Family (2006). The similarities between Kyogoku’s Chuzenji character and Yokomizo’s Kendaichi include their both stumbling across mysterious scenarios which would easily belong in a horror novel. In wrestling with what appears from all sides to be the work of some malevolent supernatural force, both characters then display an uncanny and unpredictable skill at uncovering and deciphering enigmatic clues. A primary difference between these two, however, is that the investigative progress of Chuzenji ultimately validates to varying degrees the role and reality of an ancient supernaturalism, whereas the Kindaichi narratives ultimately debunk any horrific apparitions. For this reason Seishi Yokomizo’s Kindaichi novels, despite some initial overtones of horror, remain thoroughly and purely within the Mystery genre. It is author Natsuhiko Kyogoku’s placing one foot in the door of valid folk lore which resulted in his being attributed with a “new sub-genre” akin in many ways to a horror mystery.

But it would not be accurate to leave you with the impression that The Summer of the Ubume or the other novels in the so-called “Kyogokudo (Chuzenji) Series” are ghost stories. For the Chuzenji character himself does not believe in ghosts much less the onmyoji “magic” he practices. He DOES, however, believe in the psychological, subconscious sway these ancient tales and rituals hold upon even modern minds. Chuzenji is not only versed in ancient lore and magical rituals, but also epistemology, science, and social psychology. Nor does he see any inconsistency in combining all these fields into a single, complex means of understanding and demystifying the problem at hand. It is this rather elaborate combination of superstition, epistemology and social psychology which warrants a possibly new sub-genre by author Kyogoku, rather than merely a creative mixing of the supernatural and investigative technique. 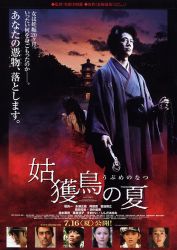 The Japanese title of the book is Ubume no Natsu. A film adaptation of the novel using the same title was released in Japan in 2005 by director Akio Jissoji, starring Shin’ichi Tsutsumi as Chuzenji. Tsutumi again played Chuzenji in director Masato Harada’s 2007 film adaptation of Moyro no Hako (The Shadow Spirit) , Kyogoku’s second novel in the “Kyogokudo Series”. One characteristic shared by both the novels and their film adaptations, perhaps to their disadvantage, is the emphasis given “explication” or what is more commonly known as “talking head syndrome”. This occurs when the advancement of the narrative/resolution hinges on quite lengthy, one-sided dialogue. This happens frequently with the Chuzenji character in both book and film. And depending on how prone/willing you are to buy into Chuzenji’s rather unique perspective, you may likely find his verbosity to be tedious. For example, in The Summer of the Ubume, what seems to be the climactic payoff occurs with 100 pages left in the book. That final chunk of text is left for Chuzenji to verbally tie up all remaining loose ends. Readers will certainly not find those last 100 pages boring, as another climax awaits them at the end of the book, but by that point in the novel, we are more than a little familiar with Chuzenji’s ability to go on and on in a rather lecturing tone as he bestows upon his dumbfounded fellow characters the depth and breadth of his insight. This particular method of furthering the plot can understandably wear readers thin and certainly does not translate well into live action film. But for those who persist there is payoff which will leave readers with plenty to admire and ponder when all is told. 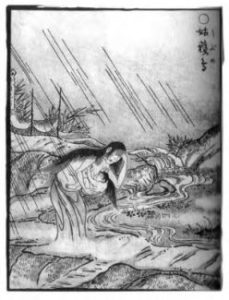 Of all the tales told, that of the Ubume is the most confounding. It is said that, when a woman who is with child passes away, her attachment to the babe takes physical form. She appears then as an apparition, drenched in blood from the waist down, and crying like a bird. Presented with stories of people transforming into such creatures after they die, how can we say we truly believe in Hell? It is beyond understanding.
~ from Collection of Miraculous Tales, 1687.

A strange urban rumor has suddenly started circulating in Tokyo, a rumor of a woman who remains pregnant for 20 months and whose husband mysteriously disappeared. As with many such urban legends, public assumptions about the scenario are scandalous and point to sexual infidelity, demonic curses, missing babies and the family’s long involvement in esoteric magic.

When tabloid writer Sekiguchi catches wind of the new rumors, he intends to cash in by writing an even more salacious version for the readers of his trashy magazine. But when he happens to meet the stunningly beautiful elder daughter of the unfortunate family, his convictions change from that of exploiter to savior. He personally vows to decimate the cruel rumors by bringing the innocent and innocuous truth to light. He makes it his effort to show that the foolish rumors involving 20 month pregnancies, demonic curses, missing babies and the family’s supposed history with magic are nothing more than slanderous lies.

With the help of his friend Chuzenji who is highly literate in all things superstitious, Sekiguchi soon learns to his horror that the rumors are indeed true and that every step he takes to uncover the truth leads him face to face with the modern reality of an ancient evil.