Of all the names within early Japanese history, Prince Shotoku (574-622) shines far more brightly than any of the rest. He was the offspring of his father Emperor Yomei and his mother the Empress Anahobe no Hashihito no Himemiko. His parents were children of Emperor Kimmei by different mothers. Unlike any of his predecessors, Shotoku turned whole-heartedly toward Chinese culture for help with legal and commonplace notions. 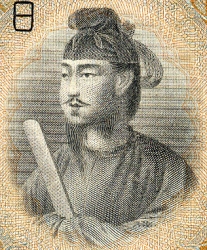 Prince Shotoku committed himself (and his court) to acquiring the skill of reading and writing Chinese, and personally delved into Chinese philosophy. It is during this time that Shotoku became thoroughly familiar with Buddhism and Confucianism, both of which became core elements of his subsequent approaches to government and social philosophy.

The Prince Imperial Shotoku in person prepared laws for the first time. There were seventeen clauses, as follows:

(1) Harmony should be valued and quarrels should be avoided. Everyone has his biases, and few men are far-sighted. Therefore some disobey their lords and fathers and keep up feuds with their neighbors. But when the superiors are in harmony with each other and the inferiors are friendly, then affairs are discussed quietly and the right view of matters prevails.

(2) The three treasures, which are Buddha, the (Buddhist) Law and the (Buddhist) Priesthood; should be given sincere reverence, for they are the final refuge of all living things. Few men are so bad that they cannot be taught their truth.

(3) Do not fail to obey the commands of your Sovereign. He is like Heaven, which is above the Earth, and the vassal is like the Earth, which bears up Heaven. When Heaven and Earth are properly in place, the four seasons follow their course and all is well in Nature. But if the Earth attempts to take the place of Heaven, Heaven would simply fall in ruin. That is why the vassal listens when the lord speaks, and the inferior obeys when the superior acts. Consequently when you receive the commands of your Sovereign, do not fail to carry them out or ruin will be the natural result.

(4) The Ministers and officials of the state should make proper behavior their first principle, for if the superiors do not behave properly, the inferiors are disorderly; if inferiors behave improperly, offenses will naturally result. Therefore when lord and vassal behave with propriety, the distinctions of rank are not confused: when the people behave properly the Government will be in good order.

(5) Deal impartially with the legal complaints which are submitted to you. If the man who is to decide suits at law makes gain his motive, and hears cases with a view to receiving bribes, then the suits of the rich man will be like a stone flung into water, meeting no resistance, while the complaints of the poor will be like water thrown upon a stone. In these circumstances the poor man will not know where to go, nor will he behave as he should.

(6) Punish the evil and reward the good. This was the excellent rule of antiquity. Therefore do not hide the good qualities of others or fail to correct what is wrong when you see it. Flatterers and deceivers are a sharp weapon for the overthrow of the state, and a sharp sword for the destruction of the people. Men of this kind are never loyal to their lord, or to the people. All this is a source of serious civil disturbances.

(7) Every man has his own work. Do not let the spheres of duty be confused. When wise men are entrusted with office, the sound of praise arises. If corrupt men hold office, disasters and tumult multiply. In all things, whether great or small, find the right man and they will be well managed. Therefore the wise sovereigns of antiquity sought the man to fill the office, and not the office to suit the man. If this is done the state will be lasting and the realm will be free from danger.

(8) Ministers and officials should attend the Court early in the morning and retire late, for the whole day is hardly enough for the accomplishment of state business. If one is late in attending Court, emergencies cannot be met; if officials retire early, the work cannot be completed.

(10) Let us control ourselves and not be resentful when others disagree with us, for all men have hearts and each heart has its own leanings. The right of others is our wrong, and our right is their wrong. We are not unquestionably sages, nor are they unquestionably fools. Both of us are simply ordinary men. How can anyone lay down a rule by which to distinguish right from wrong? For we are all wise sometimes and foolish at others. Therefore, though others give way to anger, let us on the contrary dread our own faults, and though we may think we alone are in the right, let us follow the majority and act like them.

(11) Know the difference between merit and demerit, and deal out to each its reward and punishment. In these days, reward does not always follow merit, or punishment follow crime. You high officials who have charge of public affairs, make it your business to give clear rewards and punishments.

(13) All people entrusted with office should attend equally to their duties. Their work may sometimes be interrupted due to illness or their being sent on missions. But whenever they are able to attend to business they should do so as if they knew what it was about and not obstruct public affairs on the grounds they are not personally familiar with them.

(14) Do not be envious! For if we envy others, then they in turn will envy us. The evils of envy know no limit. If others surpass us in intelligence, we are not pleased; if they are more able, we are envious. But if we do not find wise men and sages, how shall the realm be governed?

(15) To subordinate private interests to the public good–that is the path of a vassal. Now if a man is influenced by private motives, he will be resentful, and if he is influenced by resentment he will fail to act harmoniously with others. If he fails to act harmoniously with others, the public interest will suffer. Resentment interferes with order and is subversive of law.

(16) Employ the people in forced labor at seasonable times. This is an ancient and excellent rule. Employ them in the winter months when they are at leisure, but not from Spring to Autumn, when they are busy with agriculture or with the mulberry trees (the leaves of which are fed to silkworms). For if they do not attend to agriculture, what will there be to eat? If they do not attend to the mulberry trees, what will there be for clothing?

(17) Decisions on important matters should not be made by one person alone. They should be discussed with many people. Small matters are of less consequence and it is unnecessary to consult a number of people. It is only in the case of important affairs, when there is a suspicion that they may miscarry, that one should consult with others, so as to arrive at the right conclusion.