A seemingly innocent Food Mart apparently harbors massive spiritual malaise as various demonic curses inflict everyone who purchases something from the store. Only when a couple of intuitive souls wander into the store is the formidable mystery explained. 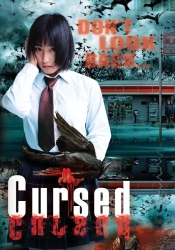 Here’s a wonderfully creepy contemporary horror tale based on an urban legend involving a haunted convenience store. This is the first of the “Cho Kowai Hanashi” (Extremely Scary Stories) series to be released theatrically and make its way to the West. Thus the full Japanese title here is Extremely Scary Story A: Dark Crow.

As this Japanese title indicates, this is part A, after which comes several others and a new “bigger better” theatrical release entitled ‘Ch�’ kowai hanashi: The Movie showcasing five polished horror stories by five different directors.

The feel and flow of this film is very similar to the old school Kowai Hanashi or Honto ni Atta films, but is far more polished and genuinely comprises a satisfactory 80 minutes of suspense and ghoulies. This tale requires little thinking but runs at a fairly fast pace fueled by creative depictions of twisted souls and excellent use of its soundtrack.

This marks the directorial debut of Hoshino Yoshihiro and I give him my two thumbs up for creating a really good pop-culture ghost story. The narrative is based on the written work of Hirayama Yumeaki, an increasingly prolific source for recent j-horror films. (Another recent film based on a Hirayama novel is Tokyo Psycho). Hirayama’s short stories generally involve either true-life crime or actual urban legends. Thus Dark Crow is likely based upon an existing urban legend regarding a haunted convenience store which wreaks havoc upon those who enter.

I personally prefer uniquely Japanese ghost tales and this is precisely within that category. And although there are indeed a few common motifs herein (amongst the many), I have substantial hope that this may be part of a new wave of J-Horror which brings to a much fuller and polished production the MANY straight-to-video ghost tales available for the past 10 years in Japan. This story adequately retains the desireable quaintness of being a local ghost tale, while presenting very few inadequacies in term of visual and audio presentation. This is indeed a good one to watch with friends for a burst of chills and maybe even some laughs.

After her co-worker is seriously injured following a deal with the owners of a local food mart, Ryoko steps in to complete the work of re-franchising the store. Once there, however, the strangeness of the store owners and the creepiness of the interior bring nothing but bad vibes.

Two recently hired part-time workers man the store, and both soon begin to notice that there is indeed something strange about the store. Worse yet is the fate of their customers who one by one meet very mysterious and grisly deaths.

Only after several harrowing encounters and a meeting with an obviously unbalanced old woman, Ryoko learns of the demonic history of the store. But is it already too late to escape the CONVENIENCE STORE CURSE!!??

This is quite fun and thus highly recommendable. Cursed offers a casual, sustained creepy story which comes across more as an experience than a thought-provoker. Although this certainly cannot compete with the exemplars in the genre, I doubt that is the intent here anyway. Rather, what this film sets out to do and what it wholly accomplishes is to explore a curiously spooky urban legend haunting an otherwise seemingly unassuming corner in Tokyo.

Check this one out if you can.

Good old fashioned ghost tale based on the written work of Hirayama Yumeaki.

SaruDama is now in love with Hiroko Sat�! She is HOT HOT HOT in that green-striped food mart shirt!

Fun, fast-paced and creepy! What more could you want?? (…besides a date with babe-a-licious Hiroko Sato!!)