This is a biographical film which follows the struggles of Edo-era artist Hokusai from his poorest beginnings to his famed accomplishments, including his notorious libidinous drawings. Though risque in much of what is depicts, this comes across as a straight-forward jidai-geki exploring a well-known historical figure’s life and obsessions. 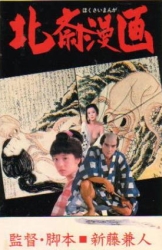 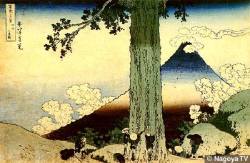 of landscapes and characters. The Japanese title of this film is Hokusai Manga, which is the name of the 13 volume sketchbook he published around 1

gaku Sanjuurokkei) gained him widespread fame while he was alive and even greater renown by subsequent generations. 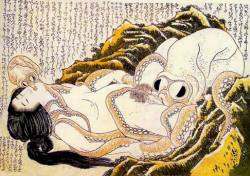 The film covers the career of Hokusai, starting with his very poor and drunken beginnings through his key successes, eventual fame and last years of life. It covers his creative struggles with his major accomplishments, including the Manga, his time spent drawing Mount Fuji, and of course the Amorous Octopus. But the narrative also goes well beyond these obvious biographical elements and includes many other artistic accomplishments and personal relationships.

Human relationships covered herein include that between Hokusai and his daughter who stood beside him throughout the entirety of his life. The troublesome dynamic between he and his father is also depicted, including his father’s suicide. And Hokusai’s fascination and obsession with the strikingly beautiful model Onae also adds plenty of intrique and inner turmoil to the plot.

But clearly the most profound and important relation explored is that between Hokusai and Kyokutei Bakin (1767-1848) a personal friend of Hokutai’s who would go on to become Japan’s first professional writer. Kyokutai is the author of the epic 106 volume Nanso Satomi Hakkenden or “Legend of the Eight Dog Samurais”. This amazing contiguous tale follows the brave and honorable exploits of eight brothers of samurai rank as they roam throughout the country encountering various challenges. The tale has been readapted many times for contemporary audiences including the 1990 and 1993 anime series The Hakkenden and Kinji Fukasaku’s 1983 film Legend of the Eight Samurai.

Hokusai provided the illustrations for an earlier work by Kyokutei, a period covered in this film. By the time Kyokutei was writing the Hakkenden, their friendship had run into hardship and a different illustrator was hired for the enormous work.

This 1981 film is the work of Onibaba director Shindo Kaneto and stars a range of top talent including Jo Shishido, Toshiyuki Nishida as Kyokutei, and Ken Ogata as Hokusai.

The Japanese public and history in general remember Hokusai in a highly favorable light, and here, despite his hedonistic fixations (which dominate this film’s storyline) he emerges as a very noble and disciplined individual exemplifying the highly preferred qualities of tenacity and utter dedication to one’s work.

This is worth seeing as a historical piece and as a study in the life of Katsushika Hokusai. Despite some infused humor, this film comes across as a rather serious treatment of the subject matter.

No lucky orgasmic octopus was harmed in the making of this movie.

Edo-era eroticism up the wazzoo (and the octopus’ snout!)

Despite the proliferate bOObies, you will definitely learn some history here!