The beautiful performer Ohyaku has had a rough life, but when she encounters the young thief Shinkuro it seems her fortunes have finally changed. However, things quickly turn from elated to horrified when a local magistrate uses a botched robbery as an excuse to brutally kill her lover and imprison her within Japan’s most notorious jail. Only through her stunning beauty and fixation on vengeance will Ohyaku possibly be able to escape her shackles and exact a revenge worthy of coming from a Female Demon! 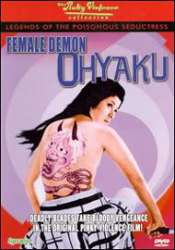 Director Yoshihiro Ishikawa is perhaps best known for his love of cats — Ghost Cats, that is. He wrote the screenplay for Nobuo Nakagawa’s 1958 early j-horror film Mansion of the Ghost Cat. (He also worked with Nakagawa in 1959 as writer for Tokaido Yotsuya Kaidan.) He then later directed two of his own Ghost Cat films, The Ghost Cat of Otama Pond (Kaibyo Otama-ga-ike, 1960) and The Ghost-Cat Cursed Pond (Kaibyo noroi numa, 1968). Thus in his own right, he can definitely be found amongst the early directors of Japanese horror film.

But as regards his 1968 Female Demon Ohyaku he is also known as directing one of the earliest Pinky Violence films, a genre which exploded in the 1970s, dedicated to female protagonists engaging in sex, revenge and yes, plenty of violence. Though in milder doses than the extremes of later films, Female Demon Ohyaku contains all the elements which would characterize the genre: a beautiful heroine, nudity, sexuality/lesbianism, rape, imprisonment, sexy tattoos, crazy torture, weapon flailing, and grisly revenge.

This film is the first of a trilogy entitled Legends of the Poisonous Seductress (Yoen Dokufuden) and sets a formidably high standard for the following two films. Each of the three films is an independent tale, though the last two films revolve around the same female character Okatsu. All three films cast the beautiful Junko Miyazono in the lead roles of Ohyaku/Okatsu. The last two Okatsu tales are directed by Nobuo Nakagawa who, as we mentioned, had worked together with Ishikawa on prior films. And while Ishikawa’s 1968 Female Demon Ohyaku employs a very bold black and white cinematography, both Nakagawa’s films, released in 1969, are in vivid color, a format which he had switched to a year earlier.

The films in the Legends of the Poisonous Seductress trilogy are: 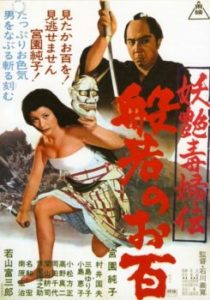 Despite their early role in the genre, there seems to be very little written about Ishikawa or his film in online discussions or film literature. None of the film references I own, including Chris D’s Outlaw Masters of Japanese Film, Donald Ritchie’s A Hundred Years of Japanese Film, or Jasper Sharp’s Behind the Pink Curtain make ANY mention of either director Ishikawa or the the Yoen Dokufuden films (including Nakagawa’s!). I’m not sure why these films have been overlooked other than the fact that they have perhaps been simply overshadowed by the more shocking extremes of later films in this genre. Even so, however, one would think that for the sake of historical origins you would find at least a nod toward Ishikawa’s film and influence. Good thing you’re reading SaruDama!

The Japanese title for this film is Hannya no Ohyaku which can be translated “The Hannya Ohyaku”. Hannya is a very specific and well-known female demon who appears throughout traditional Japanese folklore. You’re likely familiar with the traditional mask depicting Hannya’s face. It is this same depiction which Ohyaku chooses to have tattooed on her back, emphasizing the impending ferocity and violence. And indeed she becomes ferocious, enacting revenge with such relished fervor that it hearkens back to scenes of the demonic punishments taking place in the lower gates of Japanese Hell. Our lovely Ohyaku truly undergoes a radical transformation within the course of this film!

The beautiful Ohyaku is a beloved performer whose shows draw men from all quarters. But her past has allowed her to see through the power, money and smooth words which many of the men shower her with in the hopes of bedding her. Her blunt, independent streak strikes most of the men as shocking. But the young thief Shinkuro (Kunio Mirai) finds her spunk refreshing and soon the two fall thoroughly in love.

But when Shinkuro’s plan to steal an official shipment of gold collapses through the treachery of a supposed friend, the local magistrate seizes the opportunity to brutally punish not only Shinkuro, but Ohyaku as well, for spurning his aggressive advances in the past. Ohyaku is condemned to watch the grisly death of lover and then banished to hard labor within the infamously dangerous gold mines on Sado Island. As the sole female prisoner o the entire island, she must fend off both criminal and guards using any means possible.

But Ohyaku gradually learns that she can use her stunning beautiful to manipulate both men and women, and soon orchestrates her escape from the island. From there, she heads straightaway to Shinkuro’s grave and then onward to the magistrate behind her suffering. The ultimate violence she releases on the haughty official leave no doubt in anyone’s mind that the once-performer Ohyaku is indeed now the Female Demon Ohyaku.

This is a rather remarkable film on a couple levels. As a straight-out revenge film, it succeeds with ease, setting up the convincing motives in the first half and then unleashing an eye-poppingly violent resolution. It also is a strong and satisfying example of the early “female protagonist”. Junko Miyazono as Ohyaku offers a beautiful, sexy and formidable character, all within convincing dialogue and plausible scenarios. And finally, as a Pinky Violence film, this offers a very solid view of an early exemplar of the genre.

Version reviewed: Fortunately for you and I, this film is available in Region 1 DVD with English subtitles. The DVD also contains the original trailers and some good commentary by Chris DesJardins (aka Chris D). I thoroughly recommend you check this out!

Early exemplar of the Pinky Violence genre, offering all the characteristic plot elements within a powerful revenge tale.

Amazingly devilish methods of torture and punishment employed on both men and women, nobles and criminals..

Though nothing explicit compared to later standards, this tale offered some pretty racy/sexy content to its 1968 audience, including HOT LESBO action!

I really enjoyed this film and can’t get over how demonic Ohyaku becomes as she mete’s out her revenge. Definitely an early classic in the Pinky Violence genre.