The year is 1945, months prior to Japan’s ultimate defeat in WW2, and military lieutenant Sugawa is sent on a critical mission to deliver micro-fiche war plans to Tokyo from his base in Malaysia. But while flying over Chinese waters his plane is shot down and he is taken aboard a ship bound for Shanghai to deliver its merchandise – a ship filled with Female Slaves kidnapped from Japan. Will he abandon the women to pursue his main objective? Or will he fight foes, spies and pirates to save these women against all odds? 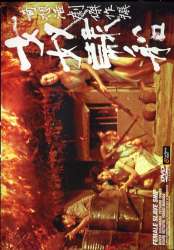 Directing a Japanese war film in 1960 would be no small feat. Anyone in the audience older than 15 years of age would have witnessed the actual defeat of Japan following WW2, an experience few would be interested in re-living. But director Onada Yoshiki, with over 115 films already under his belt, attempts this anyway with Female Slave Ship. The intent is clear: Offer the audience a tale of Japanese heroics and dignity despite looming defeat. And throw in some half-dressed babes and pirates for good measure!

The film was produced for Shin Toho Studios, which was still a powerhouse in the early 1960s. This shows through in the films rather ambitious attempt to depict conditions on the high seas in the midst of WW2. Though some stock footage of the war is used in the opening scenes to remind the audience of the film’s very stark setting, it pulls out all the stops when it later effectively utilizes special effects (miniature planes and boats) and real locations in several of the sea-faring scenes and the craggy-rocked pirate hideout. All in all the film is indeed “ambitious”, apparently was given a decent budget from the studio, and does a fairly effective job of pulling off what it sets out to accomplish.

Looking back, the cast contains some major talent which will go on to become very well-known stars in a variety of genres. The lead character Sugawa is played by Bunta Sugawara who will later become a mainstay in Japanese yakuza films. The pirate captain is played by Tetsuro Tanba, a face widely familiar in contemporary Japanese film up to his death in 2006. In all, Tanba starred in over 230 films many of which are cult yakuza classics. And Yoko Mihara, who plays the bad girl here, can be found in nearly all of the classic “pinky violence” films of the 1970s. (Almost all the Scorpion, Girl Boss, and Red Zero films, Sex and Fury, School of the Holy Beast, etc.)

Despite his great budgets, ambitions and cast, however, very few if any of director Onada’s 160 films trickled over the West. From what I can tell, Female Slave Ship may be the exception. It was distributed in the West via Eclipse films for a few years but soon fell out of print where it remains today.

I’ve seen this film referred to as an “exploitation” flick, but it certainly is not one. Admittedly, it uses the controversial notion of female slaves to bolster attention, but does not enter into anything resembling a “chicks in chains” or pink film. There is no nudity here, nor graphic violence other than a plethora of back-hand slaps. This film is primarily about Japanese dignity in a time when national humiliation is looming. It is in essence a film about noble good versus corrupted evil. And by “evil” is here meant not only the type of scoundrel which kidnaps and enslaves women, but also and foremost the type of traitor which would sell military secrets to the highest (foreign) bidder, thereby endangering the Japanese nation as a whole. The protagonist Sugawa is tasked with defeating both these evils and this film focuses on his difficulty and diligence in accomplishing this.

As the Western forces bear down on Japanese outposts throughout the Pacific, Lt. Sugawa is commissioned with a secret mission to deliver critical strategy information to military headquarters in Tokyo. To accomplish this he must fly from his location in Chinese Malaysia and across Chinese waters. In flight, however, his plane is shot down and he is picked up by a small freight vessel manned by a Japanese and Chinese crew on its way to Shanghai. Sugawa soon learns that the ship’s captain intends to sell 12 Japanese women at auction in Shanghai. His subsequent attempts at overtaking the ship, though nearly successful, are ultimately foiled. But then the ship as a whole comes under attack by Japanese pirates roaming the Chinese Sea.

The pirates have learned that Sugawa is carrying highly valuable information which the Americans will pay dearly for. They arrange the exchange of information for cash using a Chinese spy and agree to meet on the pirates’ isolated island headquarters. Once there, Sugawa and the female captives have little time to find a way to rescue themselves and ensure the delivery of Sugawa’s critical package to Japan.

In many ways this is a fairly solid film. The overall premise is good, most of the sets are convincing and the cast consists of major up-and-coming talent. I am not sure, however, how well this film was received. I know that Onada went on to make several more “women in distress” films and an even greater number of straight-out war-themed pictures. But the combination of Chinese spies, pirates and females slaves in the midst of a war film undoubtedly stretches some boundaries.

And as regards the pirates, we are offered a rather strange amalgamation of stereotypes. One the one hand our sea-faring mercenaries are indeed excellent shipsmen armed to the teeth with military-grade weapons. On the other hand, however, they dress quite similarly to the pirates of yore, with several even sporting eye-patches and head bandannas, and board enemy ships flailing, you guessed it, pirate swords. Even the pirate captain wears such a flamboyantly blue silk shirt that I’m sure Errol Flynn became envious. The only thing missing is a parrot on somebody’s shoulder.

All that to say, there is indeed a little unintended campiness going on here in addition to the rather eclectic mish-mash of plot elements. But the film pretty much stays on course, until of course, we get to the belly-dancing scene, which I agree is rather inexplicable. The trailer suggests this was to demonstrate the exotic nature of the “Southern Sea” (Chinese Sea), but last I looked, the Chinese are not known for their belly-dance prowess.

Version reviewed: Region 0 DVD with English subtitles. This title is currently out of print for Western audiences, but was distributed for several years via Eclipse Studios. Thus there are possibly some used copies floating about which you can get a hold of.

Interesting attempt at making a popular war film so relatively soon after the war. Plenty of social commentary on what a noble and honorable Japanese citizen is and is not.

Nothing graphic, but plenty of face slapping, cat-fights, fisticuffs and gun violence.

At most you’ll see: Brief Japanese attempt at belly-dancing and full length grannie lingerie circa 1945. No skin appears in this film.

The ambitious combination of otherwise irreconcilable plot elements is nearly mind boggling. But yes, we do get a coherent tale involving military heroism, female slaves, Chinese spies, eye-patched pirates and a belly dancer!