This is one of two recently released collections of ghost tales from the prolific productions of Inagawa Junji, Japan’s predominant contemporary master storyteller of Japanese ghost tales. Here you experience six supernatural “legends” ranging from the ancient to the modern . 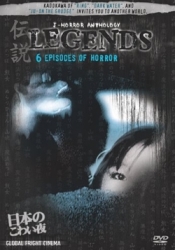 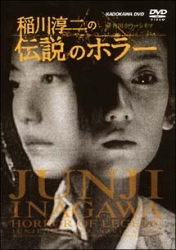 Correctly appreciating this collection of tales will likely require some knowledge of Inagawa Junji whose name appears in the Japanese titles of the two “J-Horror Anthologies” and countless other ghost-themed productions. Inagawa is a widely known TV personality in Japan, often originally appearing in rather mainstream TV dramas or Quiz/Talk shows. Over the years however, he has found his true niche in producing and narrating a hugely popular and long-running series of shows dedicated to ghost stories, ranging from documentaries of supernatural phenomena to urban legends to ancient kwaidan. (For a partial list of his works, look here.)

This collection of tales under review here is comprised of six of Inagawa’s tales. Each is a short story with a running time of approximately 15 minutes. (The directors of these tales are predominantly TV directors and so I will not go into any detail regarding their history.) Each tale is preceded and followed by brief commentary by Inagawa himself.

This collection and its counterpart, J Horror Anthology: Underworld together account for 12 tales, representing three original Inagawa collections (of four tales each). This English release’s subtitle (“Legends”) is taken from one of the original series titles. Each English release contains one full original series. The third series (listed third below) is then split between them.

The original series are entitled:

As the title implies, four of these tales involve some form of supernatural “legend” whether ancient or contemporary/urban. (The other two tales, taken from the divided third series involve contemporary “true” ghost tales.) Of particular merit in this collection is the fact that three of the tales involve rather ancient superstitions, one taken directly from the Kwaidan. Though brief and clearly made-for-television, these are nevertheless entertaining tales well worth checking out for a night of popcorn and casual chills.

The following are brief descriptions of the tales contained in this collection. The first four tales are from the original Legends/Denstsu series and the final two are half of the original Truth/Shinjitsu series. 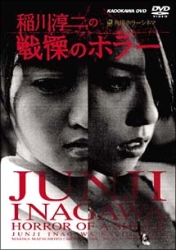 This, of course, is the classic kwaidan tale of Shinzaburo’s ghostly visit from a deceased lover. This tale has been recreated countless times and a full-length film release is available to Western audiences in Haunted Lantern. Personally speaking, the moral of this tale as I see it is simply this: Better to be the jolly priest with the large bottle of rice wine than the amorous Shinzaburo with his way-too-attached lover.

Two high school girls experience first-hand that some urban legends have far more substance than mere rumor. Here they come face-to-face with the Kuma Onna who, as the legend has it, collects grisly “mementos” from her victims.

The Yamamba of ancient Japanese lore involves a mountain (yama / å±±) spirit which makes prey of those wandering or lost in remote mountainous regions. The hideous demon generally takes the form of a harmless elderly woman (o-ba). Those unfortunate enough to be deceived by this guise are said to be devoured by the demon. In this tale, two contemporary TV producers venture into a remote rural town in the hopes of doing a story on the local legend of a yamamba.

The “Nurari Hyon” is a well-known traditional monster/ghost. The name means something like “Slippery Old Man” and refers to its most common appearance as an elderly man wielding uncanny abilities. (The Japanese adjective nuru nuru means “slippery”.) Here, Nurari Hyon appears to and is befriended by a small boy in an Edo-era kimono shop. This proves to be a fortuitous acquantance for the boy as danger soon appears. 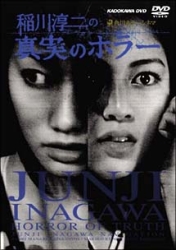 While waiting for her best friend to arrive for a weekend get-away at a remote inn, a young woman is terrorized by disturbing sights. When the friend finally arrives in the middle of the night, the eery spectres of the night seem to all but vanish. In the morning, however, another great suprise awaits.

The translation of the Japanese title is actually “Demon of the Lake’s Surface” and refers to a destructively haunting force emanating from a local lake where the tragic suicide of an entire family has taken place. When two young people decide to stop at a lakeside noodle shop for a midnight snack, the matter of getting home safely suddenly becomes a life and death issue.

These are all fun and entertaining tales. As mentioned earlier, the running time of each is approximately 15 minutes and so you should probably not expect from this the same experience as you would receive from a prolonged, well-woven ghost tale. These are intended (by Inagawa) as short, spooky tales with a variety of content. The emphasis here is upon ghostly entertainment rather than directorial or ground-breaking achievement.

Its a fun view, well worth the cheap price of admission.

Three of these tales involve historical superstitions and ghost legends.

Well, she sexily and slowly peeled of her kimono to show Shinzaburo ANOTHER FULL LENGTH KIMONO UNDERNEATH! No wonder Japanese guys had so much time to sit around thinking up all these ghost stories.

Enjoyable and fun short ghost stories. Nothing earth-shattering here though.