Young Fukie is suddenly stricken with a mysterious malady and is rushed to the local hospital for examination. Though her situation appears to be stabilizing, those coming into contact with her soon find themselves at the mercy of a dark, malignant power.This new Ju-on film is one of two made for the 10th anniversary commemoration of the Ju-on’s original appearance. 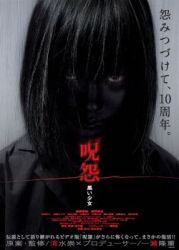 Ju-on: Kuroi Shoujo is one half of a double feature commemorating the 10th anniversary of Takashi Shimizu’s 1999 Ju-on. Following that 1999 made-for-TV movie, there have been more than 8 others, all either sequels, theatrical releases or foreign remakes. To mark the 10th year from the original, Toei Studios produced two new Ju-on films. Neither new film has Shimizu at the directorial helm and instead, leadership of the projects was given to two different directors. The first film, Ju-on: Shiroi Roujo is directed by Ryuta Miyake. This second film, Ju-on: Kuroi Shoujo is directed by Mari Asato.

Director Asato has worked on a few other films that fall within the realm of SaruDama interest. We have previously reviewed her dancing revolutionaries film Samurai Chicks (2004) and the Z-grade horror Boy from Hell (2004). Both those films are memorable for their own reasons. Unfortunately, those memories are not pleasant ones. Asato’s work on Kuroi Shoujo is (IMHO) the best I have seen from her thus far.

And yes, as you may have inferred from her given name Mari, director Asato is indeed of the female variety. And that, I believe is important. For besides simply meaning that she therefore has breasts, it also suggests that she might bring to a film like Ju-on: Kuroi Shoujo an uniquely female perspective. And after watching (male) director Miyake’s Ju-on: Shiroi Roujo and this film back to back, I must admit I see a lot of differences which may be attributable to the directors’ differing genders.

Miyake’s version (Shiroi Roujo) focused almost exclusively on the grisly violence perpetrated by males, most predominantly by the young man who kills his entire family. You’ll also notice in that film that despite there being victims of both sexes, there are only female ghosts. The emphasis of Miyake’s film is by far on the rather shocking violence of a berzerkoid male on female victims.

Asato’s version also has some violence seemingly perpetrated by a male against a female, but even there viewers are left wondering whether what they think happened actually did happen. The males in Kuroi Shoujo are not crazed killers, but are clearly haunted into unintentional acts of violence at the hands of a female ghoulie. Instead of Miyake’s explicit emphasis upon misogynist acts, Asato’s version focuses more thoroughly on the vulnerability, malevolent power or even heroism of the female characters. In short, it is a female-centric Ju-on tale.

And that’s not to say that the original Ju-on tales were not similarly female centric. In my review of Miyake’s Ju-on: Shiroi Roujo I touched on this briefly, but here again I find it interesting. The entire Ju-on legacy revolves around a curse which stems from a jealous husband’s murder of his wife and child. Thus the entire saga can rightly be said to begin with an act of misogyny. But from that initial act onward, the curse is all about the malevolent presence of the wife (Kayoko) and her son (Toshio). There are no male ghosts in the Ju-on world, just women and their young offspring. Thus the original Ju-on films actually contain two strands, one consisting of the initial (and relatively brief) violence of the husband against the wife and child, and the other (for more predominant) strand consisting of the demonic curse being meted out by the female ghoulie. Miyazake’s version focuses almost exclusively upon that first strand, even to the point of failing to depict the central female Ju-on ghost. Asato on the other hand, focuses exclusively on the second strand, that of the female ghoul, and explores how this impacts an almost wholly female cast.

Also of interest in Asato’s approach is the introduction of a female Shinto shaman whose spiritual power and purity is effective (?) in quieting the malevolent forces. This is the only scene (that I recall) in any of the Ju-on films where any progress whatsoever is made in overcoming the Grudge.

Like the original Ju-on tales, Kuroi Shoujo is divided into seven vignettes, each depicting a seemingly unrelated story which ultimately interweaves with the whole. Each vignette is titled after the main character impacted within it.

Young Fukie is suddenly stricken with a mysterious malady and is rushed to the local hospital for examination. Though her situation appears to be stabilizing, those coming into contact with her soon find themselves at the mercy of a dark, malignant power.

Of the two new Ju-on films, I felt this one, Kuroi Shoujo was the more polished and truer to the overall pathos of the original Ju-on tales. The violence depicted here is not nearly what is found in Miyake’s Shiroi Roujo, but the nature and impact of the Ju-on grudge gets much fuller treatment here. And while both these films introduce new elements into the Ju-on legacy, Asato’s additions are both eerier and better presented via special effects.

But my comparing any one of these two over the other is likely a moot point when it comes to your choosing which to see, since they both will likely (if ever) be made available to Western viewers on a single “double feature” DVD much like we saw with the Western release of Shibuya Kaidan 1 & 2 (The Locker). Both these new Ju-on films are relatively short, each with a running time of approximately 60 minutes, making them good candidates for a single DVD release. But I guess we’ll have to wait and see.

10th Anniversary commemoration of the emergence of the Ju-on franchise.

Not much in the way of gore or bloodshed. The emphasis here is on supernatural haunting.

Mr. Yokota thinks he’ll get lucky with one of his female subordinates, but of course that turns out badly.

Interesting return to the haunted realms of Ju-on, this time with Shinto Priestesses and haunted Belly Buttons.