When the Yokota family discovers a sprawling home on the market for a rock-bottom price, they can’t resist and quickly move in. Little do they realize that their new dream home was once occupied by the infamous Saeki family and the locus of a horrendously malevolent curse on all who enter. This new Ju-on film is one of two made for the 10th anniversary commemoration of the Ju-on’s original appearance. 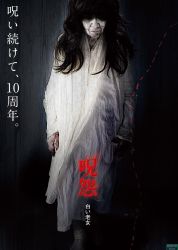 Well, apparently 10 years have passed since director Takashi Shimizu first introduced audiences to Ju-On (The Grudge). Since then the Ju-on franchise has nearly rivaled the pervasive popularity of Hideo Nakata’s 1998 horror blockbuster Ring. Ju-on first appeared in 1999 with a made-for-tv movie. It was quickly followed by another TV sequel, Ju-on 2 that same year, also directed by Shimizu. Then in 2002, Shimizu directed a theatrical release of the tale, followed a year later by a theatrical release of the sequel. Since then, Shimizu has directed two U.S. remakes (Grudge 2004, Grudge 2 2006), and worked as producer on a third, German film, Grudge 3 (2009).

The year 2009 marked the 10th anniversary of Ju-on’s appearance and to commemorate the date Toei Studios produced two new Ju-on films. Neither new film has Shimizu at the directorial helm and instead, leadership of the projects was given to two different directors. The first film, Ju-on: Shiroi Roujo, which we are reviewing here is directed by Ryuta Miyake. The second film, Ju-on: Kuroi Shoujo is directed by Mari Asato.

Director Ryuta Miyake has previously directed short horror stories contained in a few of the Kaidan Shin Mimibukuro series and has written stories for the Honto ni Atta collection. In particular, he directed a short story entitled “Full-Length Mirror” in the 2004 Kaidan Shin Mimibukuro (Tales of Terror), introducing several of the themes/props he redeploys in Ju-on: Shiroi Roujo. Why this re-use of horror props for two wholly unrelated films occurs, I do not fathom. Outside of the short list provided above, Miyake did little if any other horror films, so perhaps he simply didn’t have anything else in his arsenal. Or perhaps he thought no one would notice the re-use. But depending on how avid a fan of J-horror you are, this may unfortunately not be the case. (His “Full Length Mirror” is viewable on the Region 1 DVD release of Tales of Terror (2004)). In any event, Miyake was likely given the directorial task for this remake due to his prior work as assistant/co-director with Shimizu on Kodai Shojo Dogu-chan (2009), a brief TV series involving supernatural/folklore themes.

Each of the two new films follows the general format of the original, dividing the tale into seven separate vignettes, each named after the primary character affected in the segment. (Miyake appends an 8th vignette entitled “Ending” which contains the storyline resolution.) Each also centers geographically on the infamous Saeki House which appears in every Ju-on film, including the Western remakes.

As regards Miyake’s Shiroi Roujo, that is basically where the similarity to the original ceases apart from a non-relevant scene in which Toshio, the oft-depicted ghost-white, meowing boy appears. In place of other original plot elements, Miyake interjects props from his earlier “Full Length Mirror”. This includes, of course, a full length mirror which serves as a malevolent conduit to the ghoulies haunting the house. It also, somewhat inexplicably, includes the depiction of the main specter as a white-faced, wild-haired apparition carrying a BASKETBALL! The tale of “Full Length Mirror” took place within a high school gymnasium, and the ghost involved was that of a little boy who wished to continue playing (with his living victims), so the appearance of the basketball was not out off place. In Shiroi Roujo, the setting is always within a residence, primarily the newly inhabited Saeki house, and the ghoulie, as the film’s title suggests, is an old lady who for no obvious reason prefers to carry a basketball around. (I kid you not.) Both these props replace any appearance of the original mother, Kayoko Saeki, who served as both conduit and primary perpetrator of the Ju-on curse in the other films.

In addition to the mirror and basketball-toting ghoulie, Miyake borrows other horror props from films not his own, apparently to fill the remaining gaps in his own creativity. These include a game of Kokkuri-san (Ouija) played by three high school girls, the sudden wandering of a little girl ghoulie into the third toilet stall on the left and the introduction of a Cursed Cassette Tape which functions much like the VHS of Ring in spreading the curse. When you put these all together and then throw them into a Ju-on film, I think you can see the source of my suspicions regarding Miyake’s creativity as a horror director.

But what Miyake lacks in creativity, he compensates for with grisly violence. Here, the Ju-on curse involves burning screaming victims alive, crushing skulls with baseball bats, fatal use of large kitchen knives, a rather sickening beheading, and hanging. This level of violence also departs from the characteristic Ju-on tales, where a victim’s demise is usually implied after a face-to-face confrontation with either Toshio or Kayoko. It is true that the origin story of the Ju-on series involves the grisly murder of a mother, son and cat by Mr. Saeki. Brief flashbacks depicting these acts are occasionally used in the various films to connect the malevolence of Kayoko and Toshio to its source. But Saeki’s violence is never explained in terms of the supernatural. Rather, he is always merely a violent and abusive husband whose jealous rage results in violent murder. This wholly avoidable violence toward woman and child is the origin of the “grudge” upon which all these films have revolved.

And so it is interesting that rather than follow the hauntings of Kayoko and Toshio, Miyake chooses to depict the Ju-on curse as re-creating a murderous binge like that of the original Saeki. Fans of the Ju-on films will recall that the ghost of the father (Saeki) never appears, which makes sense since he, as the perpetrator, would have no cause for a “grudge”. Only his victims, Kayoko and Toshio would. But this raises (in my mind, at least) the question of who, exactly, is telling the new murderer (Yokota) to kill his entire family? By saying nothing on the matter, Miyake seems to want us to think this is merely the doings of the Saeki curse, but I don’t think it makes any sense to suggest the ghostly mother and child wish to re-create the murderous actions of the husband which put them in this predicament in the first place. And so it is telling that neither Kayoko nor Toshio make (virtually) any appearance in this film and that the only face ever reflected in the mirror is Yokota’s own.

All that to say, it is thus my opinion that in addition to all the other borrowing Miyake did to come up with his storyline, his entire over-arching tale is basically a re-telling of the original Saeki event, the differences being only in the number of family members, the manner of their demise, and the fact that Yokota snaps after seeing himself in a haunted mirror (as opposed to Saeki snapping due to jealous rage).

Make of all that what you will my friends. I’m personally glad to get that off my chest.

The Yokota family moves into their new dream home, not knowing its low selling price is due to its being the notorious Saeki house, the location of a litany of mysterious and grisly deaths. Before long, however, the cursed house overpowers the fragile family, adding even more ghastly murders to its history.

Meanwhile, the police are investigating a bloody murder-suicide after finding the hanging body of a young man in the woods. Next to the body they find an enigmatic cassette recording of the suicide and a duffle bag containing the severed head of a young girl.

Well, as you can tell from my review above, I was not very impressed by Miyake’s version of the Ju-on legacy. Admittedly, there are enough similarities, in locale and structure, to make this feel as if we are back again in the cursed grip of the Saeki grudge. But nothing in Miyake’s horror tale is actually dependent on the original Ju-on tales. He introduces his own mirror as the source of young Yokota’s possession, his own fuzzy-haired, basketball clenching ghoulie as the main source of malevolence, and basically borrows the original Saeki scenario as the backbone of his own tale. The only connection to the original Ju-on story that I can see is the placement of the haunted mirror in the Saeki house. This would seem to imply that the mirror is haunted because it is in the Saeki house. But as we have seen from Miyake’s own earlier “Full Length Mirror”, his notion of the haunted mirror is simply that of a haunted mirror and does not require a haunted environment. (In other words, the mirror was haunted not the gymnasium in which the mirror was found.) And so it is very easy to imagine this very same Shiroi Roujo ghost tale taking place anywhere or anytime, as long as the mirror was there as well.

So, as a grisly ghost tale, I can say that this does a decent job, while admitting that the rather goofy use of the basketball is nothing but distracting. As a Ju-on tale, however, I was consistently more baffled and frustrated than entertained. There was far too much non-Juon stuff being borrowed and imported into the storyline, while most of the primary Ju-on elements and basic modus operandi were removed.

I do not believe the original 1999 Ju-on films were ever released in subtitled, Western format. Only the Japanese theatrical releases made it this way. Both these new films, Shiroi Roujo and Kuroi Shoujo are shorter than theatrical releases, each with a running time of approximately 60 minutes. Though separate films, they seem to belong to a “double feature” set. Thus I am not really sure as to the likelihood of their becoming available in Region 1 DVD format. I suppose they could eventually follow a path like the similarly short Shibuya Kaidan 1 & 2 (The Locker), where both films were eventually released on a single “double feature” Region 1 DVD. I guess we’ll have to wait and see.

10th Anniversary commemoration of the emergence of the Ju-on franchise.

Only a handful of violent scenes, but what they each suggest/imply are gruesome indeed.

Creepy vibes from the older brother toward his young sister, but the conclusion of that scenario falls under the “violence” rating.

This is an effective return to the original world of Ju-on, with plenty of other (borrowed) trappings thrown in.