When young Asa loses the lives of her father, mother and even herself at the hands of a cruel land owner, the cry for justice is loud enough to literally wake the dead. This relatively “modern” ghost tale is as much a warning against rousing angry spirits as it is against inhumane socio-economic conditions. The film is the final “kaidan” of the 1950-1960s collection by early j-horror maestro Nobuo Nakagawa and showcases his decades as a premiere ghost-story teller. 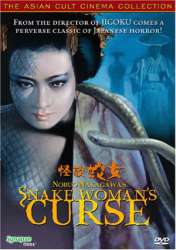 Nobuo Nakagawa is a director well-known for early j-horror classics permeated with historical detail and the effective use of early special/cinematic effects. He is most remembered for only the handful of films he directed between 1956 and 1960, during which time he produced films with an increasingly supernatural emphasis. This progression started with almost purely historical tales incorporating some element of ghostly haunting and then moved into the re-telling of traditional and well-known Japanese “kaidan” (ghostly tales) with origins dating back to the 1600’s. This brief arc seemingly culminated with Nakagawa’s remarkable and genre-breaking depiction of sinners’ judgment in the 1960 film Jigoku (Hell). Based on these films within the span of only 5 years, Nakagawa is now widely recognized to be one of the pioneering fathers of j-horror film.

Throughout most of the early 1960s, Nakagawa primarily directed short pieces, often Kaidan, for Japanese television. But he returned to j-horror film in 1968 with Kaidan Hebi Onna (Snake Woman’s Curse), a film quite distinct from his previous horror films both chronologically and cinematically. Although it is fair to say that this is the “final” film in his original Kaidan collection, he did direct one last Kaidan film at the age of 78, Kaidan: Ikiteiru Koheiji (The Living Koheiji) in 1982. Ikiteiru Koheiji would truly be his final film. Nobuo Nakagawa passed away in June, 1984.

With a few exceptions, Nakagawa’s films take place in very specific historical moments, with great attention paid to the cultural and political sensibilities of that time. For me, this has always made these films quite valuable and even educational. This attention to detail also carries over into traditional Japanese notions of the supernatural and ghostly. The “logic ” we see employed by the spirits and underworld in Nakagawa’s tale conform to traditional Shinto and (Japanese) Buddhist expectations. Thus in his 1960 film Jigoku we are offered a fairly straight-forward (albeit bizarre) depiction of the Shinto notion of Hell in all its grisly splendor. In Kaidan Hebi Onna we find another core Japanese belief regarding the deceased spirits — a permanent transfixing of the dead upon their final, most powerful emotion.

Lafcadio Hearn recorded an ancient tale involving this notion within his 1904 collection of Kwaidan. The tale is entitled Diplomacy and details how a clever samurai tricks a dying soul into focusing on an object so as to avoid being haunted by the angry man’s spirit. The logic of all this is spelled out in the tale itself: “If any person is killed while feeling strong resentment, the ghost of that person will be able to take vengeance upon the killer.” This traditional idea of a deceased spirit has permeated Japanese horror tales and films throughout the centuries and also provides a central theme in Nakagawa’s Kaidan Hebi Onna. It is for this reason that the haunting spirit of the father, who died in the throes of concern regarding the loss of his land, repeats the same line over and over whenever he appears. His most vexing concern at the moment of his death has carried over with him into the afterlife and he in now “trapped” within that emotion until some resolution is met.

This same notion explains the emergence of the Hebi Onna or Snake Woman. Asa’s mother is violently killed while trying to protect a snake. Her empathy for the creature then crosses over with her and becomes the central characteristic of her haunting, making her a formidable ghoul able to conjure up and even transform the living into scaly, slithering apparitions.

All that to say: Were there no traditional notion of the fixating of the dying soul, there would be no “Snake Woman”.

One last item worth noting is the historical setting for this tale. While most of Nakagawa’s “Kaidan” films take place within the early part of the Tokugawa/Edo Era (1603-1868), this tale takes place much later, in the early Meiji Period (1868�1912). The Meiji Era is generally considered to be the beginning of Japan’s “modern era” and saw many changes both politically and socially. Despite this new modern era, the vast majority of characters in Hebi Onna are either poverty-stricken farmers or indentured servants, all working for a wealthy and unscrupulous land owner. In this scenario, the land owner has made use of the advantages of the new modernity, thereby enriching himself vastly. But he still imposes a very harsh and inhumane feudal system of governing over those on his land. The huge discrepancy in the living conditions of these two groups is obvious, even emphasized, from the film’s opening scene — and things quickly get worse from there.

Thus in addition to the other traditional elements of this ghost tale, Nakagawa is also clearly focusing on a form of social commentary, where greed, social injustice and economic oppression are ultimately avenged by greater, more formidable powers. This focus is brought into sharp detail in the film’s final scenes depicting the oppressed deceased making their ascension toward Heaven.

Along with her mother and father, Asa works strenuously to both survive and meet the ever-increasing demands of their rich and unforgiving landlord. When the landlord declares that the family will lose its farm due to debts owed and that repayment will be made through the indentured enslavement of the mother and daughter, the aged father’s heart fails in the midst of his pleading for mercy.

The women are then left to face the whim and debauchery of the landlord and his son, as well as the scornful oppression of the landlord’s cruel and jealous wife. While their situation progressively worsens, first one and then the other dies a miserable death, making their lives and death a testimony to the miserable fate of the poverty-stricken and oppressed.

But soon strange apparitions and visions permeate the landlord’s household, affecting everyone within. Bewildered by increasingly horrific visions, Asa’s haughty oppressors bring upon themselves the justice they deserve.

As with all of Nakagawa’s films, I can recommend this wholeheartedly. The film captures an accurate representation of the historical milieu, including all its social and supernatural trappings. This and the other “Kaidan” films by Nakagawa offer rather faithful re-tellings or depictions of traditional Japanese ghost tales. And who wouldn’t enjoy that?

Version reviewed: Region 1 DVD with English subtitles. This is currently available through all mainstream venues. (!)

A traditional style Kaidan set in the early Meiji Era with plenty of ghoulies, revenge hauntings and social commentary.

The landlord’s cruelty apparently knows no bounds, and his son makes sexual playthings out of the unwilling women.

Some sexually-themed elements, almost all involving the forced and unwanted relations between the landlord’s son and his horrified female servants.

This comes across as a creepy traditional ghost tale with plenty of green, scaly women and a graveyard suddenly sprouting up in the living room.