Genre: Gamling degenerate risks it all to become debt free.

If you enjoy gambling movies, there are plenty of titles to choose from. But after watching Kaiji: The Ultimate Gambler, I must admit that it’s different from any other flick from this particular genre. Its over-the-top approach may not be to everyone’s taste, but when you scratch under the surface, Kaiji is a movie with a strong message.

The movie was actually inspired by the first part of the Kaiji manga series entitled “Gambling Apocalypse.” Knowing this, it’s not hard to understand why the main plotline and some of the scenes have a surreal feeling to them. 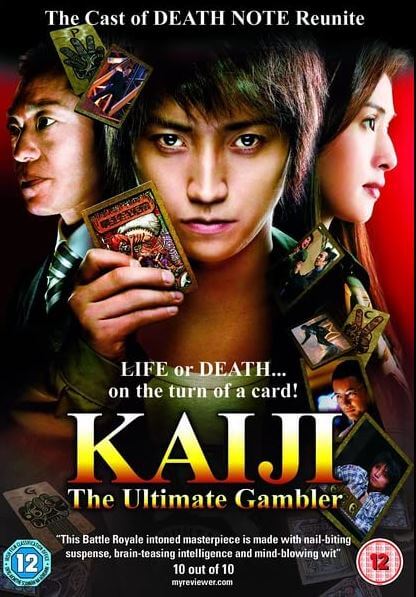 A Chance of a Lifetime

The movie follows the main protagonist Kaiji, played by Tatsuya Fujiwara. Kaiji is still a young man, but he’s turned 30 and he doesn’t have much to look forward in his life. Kaiji spends his days gambling and he is constantly in debt, and it’s just the matter of time when his life will take a turn for worse.

The central story begins with the appearance of Rinko Endo (played by Yûki Amami), a loan shark who came to collect on the debt. Of course Kaiji doesn’t have the money and his prospects look very bleak.

But then Endo offers him a chance of a lifetime. Instead of spending next ten years of his life working exclusively to pay off the debt, she invites him to a deadly gambling cruise. It’s just one night, and if Kaiji can win, his debt would be wiped clean, and he’d have a shot at winning much more.

Given the situation and after some persuasion from Endo, Kaiji accepts the offer, not knowing what he’s about to get himself into.

Putting everything on the Line

When you think about gambling, you think about games like roulette, blackjack, or similar games often found even on a $1 deposit casino. But Kaiji: The Ultimate Gambler will surprise you, because the game that takes the center stage during this life-changing gambling cruise is actually rock-paper-scissors.

As you probably know, the game is simple enough and there isn’t much strategy to it, but the way the competition is set up opens opportunities for strategizing and trickery. At first, Kaiji fails to understand what is required to win, but manages to find his feet as the night progresses.

Those who lose are sentenced to hard labor in underground mines, where they only get the bare minimum required to survive. But the winner can expect their life to change completely.

Of course, it wouldn’t be much of a gambling movie without the final showdown against the main villain. After successfully going through the first stage, Kaiji gets to play a game similar to rock-paper-scissors, but this time against an undefeated player representing the main man behind the spectacle.

He first puts his money on the line, but then stakes get higher as he’s extended a loan in exchange for his life-long servitude in the underground mines if he loses the game.

Just as everything seems lost, the movie takes an interesting and somewhat unexpected turn, and Kaiji comes back for one final game, with another life now on the line, alongside 80 million yen.

I don’t want to spoil the ending for you, so I’ll stop here in case this review has inspired you to watch Kaiji: The Ultimate Gambler. It suffices to say that the final moments of the movie are really filled with suspense and will grab your attention.

Is Kaiji: The Ultimate Gambler Too Much?

All gambling movies have a tendency to make things too spectacular and hard to believe. Kaiji is at least set up in an environment where the kind of the game that’s being described could definitely take place in. Whether such an environment is believable or not is a completely different story, but that’s neither here nor there. It’s a movie after all, and the one inspired by manga no less.

In some scenes, there is the feeling of trying too hard, and these scenes do make it somewhat hard to become completely immersed in the movie. But even with that, Kaiji: The Ultimate Gambler is an interesting movie that you won’t regret seeing as long as you know what you’re getting into.

After watching the first and second season of the anime i have watched this wonderful movie, the movie is not epic as the manga, but it was pretty good, it’s very difficult to make a 2 hours movie from one season, but the actors were very impressive, i was very excited from the beginning of the movie until the end, if you didn’t watch the anime , trust me you’re missing a lot!

There’s a lot of violence in this movie and that’s what makes it exciting. They are gambling super high stakes and the loser will face violence.

Not too much sex in this movie as the whole premise of the film is gambling and risking it all.

It’s a very strange and over the top movie, but one can’t help to wonder if these types of events happen around the world.