Kirei?
[Kirei: The Terror of Beauty]

A prosperous cosmetic surgeon is approached by a woman utterly crippled by an inferiority complex over her lack of beauty. When the woman hands over wads of cash during her request, the doctor quickly agrees and a series of initial surgeries are scheduled to fix eyes, nose and chin, etc. But with the completion of each surgery, the woman desperately pleads for another and then hands over another mountain of cash. When the doctor finally asks a psychiatrist’s opinion of the woman’s never-ending hunger for more surgery, he strongly warns against any further procedures and worries for the safety of the doctor, leaving the doctor to decide between this advice and the huge sums of money. 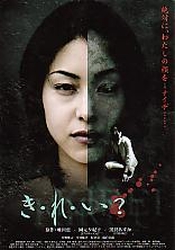 Director Mastumura Katsuya’s only other directorial work was on the 1992 original All Night Long and its four sequels, none of which I have yet seen.

I personally am not attracted to pure “gore-cringe” films whose sole shock value is in the amount of grossities which are spilt out onto the screen. Thus it is doubtful you will ever find reviews here of the notorious Guinea Pig series nor likely any of Matsumura’s All Night Long films.

There are, of course, gore-cringe films which hold other value and thus do appear her at SaruDama. The (actual) politico-historical background of the otherwise shocking Kichiku Dai Enkai certainly places the film in this category. Others here would be the Romero-spoof Stacy and “campy bad” Junk and Donor. Et Cetera Et Cetera…

I mention all this because Kirei?, the film under review here, is of the “pure” variety and uses surgical gore as its sole claim to “horror”. In the place of politico-historical, tongue-in-cheek or simply fun nuances, Kirei? somehow wishes to make a serious statement on the current explosion of interest among Japanese women in cosmetic surgery. Had this statement been a core conviction of Matsumura’s around which he built his film, this may have been akin to other issue-driven films such as Kichiku. But it immediately becomes clear to viewers that Matsumura’s choice of cosmetic surgery was not ideological and those actually trying to follow his “statement” will not only experience contradictions but also unresolved confusion by film’s conclusion.

So, not surprisingly, this film is not really about a philosophical stance on cosmetic surgery, but rather about exposing audience members to various “shocking” scenes of gore using sterilized scalpels and liposuction machines.

To its merit, this tale effectively uses the legend of Greco-Roman Aphrodite as a modicum of underlying principle regarding the character’s attraction to their fate. Without this over-arching element, well… let’s not even go there.

The cast here is quite decent and comprised of hotties which j-film fans will be familiar with. The money-hungry plastic surgeon is played by Okamoto Yukiko who you may also recognize from Bounce Ko Gals (1997), Another Heaven (2000), Returner (2002), and Shin Mimi Bukuro (2003). For some reason along the line, she here plays a frequently naked and (convincingly) orgasmic character. The “ugly” patient is played by Kurozawa Asuka who any red-blooded male who has seen Snake of June (2003) will remember as the long-legged, sex-centric mini-skirt wearing character Rinko. And the (diminutively) hunky Dr. Normura is played by Kusano Youta of the original 1999 Tomie.

Cosmetic surgeon Noguchi runs a lucrative clinic in downtown Tokyo. She salutes herself at her own success and charges her beauty-hungry customers liberally in order to pay for her various debts. Yet she believes herself to be both moral and respectable, acting always in the best interest of her customers.

But then Noguchi is visited late at night by Yoshie, a woman whose lack of beauty (“ugliness”) has utterly crippled her socially. Yoshie does not stand up straight but hunches over to hide her face. She does not walk through town during the day in order to avoid the ridiculing stare of strangers. She has not looked into a mirror since age 10, and from her appearance, you’ll be inclined to believe it.

But Yoshie has one thing in her favor, a mysteriously HUGE amount of cash which she throws at Dr. Noguchi as she pleads for surgical help to rid herself of her ugliness. Noguchi readily agrees and even accepts Yoshie’s demand that her procedures take place after hours when even the nurses are absent. 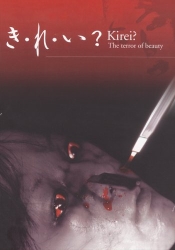 Audiences then become privy to the bloody intricacies of cosmetic surgery ranging from eyelid incisions to goopy liposuction to nose jobs to surgical enhancement (?) of the, uh, “nether region”, if you know what I mean.

Dr. Noguchi ends up doing everything Yoshie demands (to the extent that Noguchi finds herself bent over the toilet vomiting). But with the conclusion of each surgery, Yoshie more adamantly demands further surgery. When (after collecting a mountain of money) Noguchi stops taking appointments for Yoshie, bad things, VERY bad things begin to happen at the prestigious Noguchi Beauty Clinic.

Well, if (and only if) you get a tingle from seeing what normally resides hidden within the human body suddenly open and oozing before your very eyes, you may just enjoy this. Otherwise you’ll likely see this as an intellectually vapid effort to shock through gore and nothing else. There’s no humor here nor any compelling meta-theme to pull this out of the “blood and guts” category.

And even so, this film hardly earns that title. The most shocking scene in the film, which lasts all of 2 seconds, appears prominently on the US release’s DVD/VHS cover and (unbelievably) on the DVD menu screen. If the marketing department decides that the film’s best hope of survival is to display its most graphic and shocking scene on its cover, you can bet the film is weak in every regard. (And you’d be right.)

Plenty of surgery-based gore. And then there’s the use of corrosive acid as a facial wash…

An amazing amount of “girl on top” orgasmic sex. Twice as many exposed breasts as characters in this film.

I personally don’t like the “pure gore” genre and found this wholly unappealing.