In the midst of dealing with boyfriends, secret lives and existential gloominess three high school girls decide to consult a Ouija board for insights into their futures. Little do they realize that Kokkuri-san, the guiding force behind their foray into spiritism, is ready to unleash a dismal, karmic, supernatural whirlwind which brings nothing but destruction to them all. 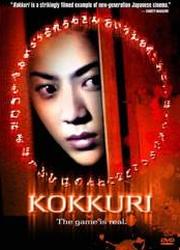 First off, this film is already released in the US in subtitled format. A long while back I watched the original Japanese release and more recently revisited the subtitled version. And I am here to confess that even with the subtitles, I am not sure I understand what is going on in this film. I remain mystified. Mystified. Gloomy. Depressed.

The Japanese title to this film is Kokkuri-san. The English title is simply Kokkuri. As the Japanese title’s use of “san” suggests, the term/name Kokkuri refers to “someone”. The word Kokkuri appears to be rather ancient and ubiquitous throughout Japan. Everyone knows who/what the name refers to. It is the name given to the spiritual entity contacted through a ouija-like game played by curious youths seeking insight into serious matters of the unknown such as who loves who, etc. Regarding the meaning of the term “Kokkuri” I wrote the following in my review of 13 Nights (Juusan Yoru) in which a simiilar story is told (also entitled “Kokkuri-san”):

The “kokkuri” references one of several traditional interpretations. One tradition suggests that the name “kokkuri” comes from the rather ancient divination practice of placing three intersecting chopsticks in a large bowl of rice. The bowl of rice is offered to the dead in the same manner in which smaller bowls of rice are offered during the national holiday of Obon. By holding one’s hands over the intersecting chopsticks and invoking the name of the dead, the bowl is said to tremble back and forth under the dead spirit’s influence. In the Japanese language, such trembling motion is described as “gokkuri gokkuri”, and thus the practice eventally came to be known as “kokkuri-san”.

You’ll notice from that description that the name “Kokkuri-san” thus applies to any deceased soul contacted. Thus while the ouija player continuously refers to the ghoulish informant by this name, he/she actually has no idea who is being contacted (unless the ghost decides to divulge its identity, of course). This “unknown” regarding Kokkuri-san’s identity is the central horror element in this film since, as it turns out, two of the three high school girls at the narrative’s forefront have some history with this particular Kokkuri. Thus the spooky undercurrent of the film is (intended to be) two-fold. One the one hand, the children’s game of Kokkuri actually works by calling some presence into their midst. On the other hand, Kokkuri-san may in fact be a malevolent entity who has been hanging around you for quite some time waiting for a chance to wreak havoc.

But this tale is about much more than the actions of the Kokkuri-san. It is predominantly a tale about the often brutal dynamics of friendship (and quasi-friendship) between HIGH SCHOOL GIRLS. Thus audiences are in for more cat-fight squabbling than you’ll get on reruns of 90210 and more than enough estrogen-fueled gloominess to put the Goth/Emo crowds to shame. Everyone here seems to be teetering at the Existential Edge, ready to plunge headlong into the Abyss of Despair. Talk of suicide abounds as does teen heart-break, regret and tears. There’s also a little b00bage and some flirtations with lesbianism, so keep reading guys.

So make of that what you will. This is going to be one of those films where you sit through alot of sappy melodrama while anxiously awaiting some Japanese horror. In a way this reminds me of Perfect Blue where in order to get to the (supposedly) scary moments I had to sit through a 45 minute expose on the glamorous life of a teen model. (Only to be disappointed by both the facts that I didn’t have what it takes to be a teen super model and that there were in fact no scary parts in the film after all that.)

This film is directed by Takahisa Zeze who is either a jack-of-all-trades or a master of none. I am leaning toward the latter. He seems unable to choose a favorite genre, resulting in his various films being all over the map and coming across rather shallowly. With Kokkuri-san (1997) he attempts teen angst mixed with horror. Then he moves to a Bonnie and Clyde-like crime love story with Hysteric (2000). Then some cyber-punk erotica with Tokyo X Erotica. Then on to a couple comedy films before directing the Poseur Pop-Star Sci-Fi Vampire flick Moon Child (2003). Etc. I think you get my point. The seeming effect of this experimentation with genre is that you end up with what amounts to his first attempt at topic X, Y or Z minus the experience more genre-specific directors might bring to their films.

None of the central starlettes appearing in Kokkuiri-san have much more of a film resume. The only one with any relevance to Japanese horror is 10 year-old Saki Aoshima who here plays the little ghouly. A month after this film she appeared in Haunted School 3.

The popular and seemingly street-wise radio host Michiru proclaims to her listeners the ease and effectiveness of garnering secret facts by consulting “Kokkuri-san”, a traditional Japanese form of Ouija. Three high school girl friends decide to experiment to ask about their futures and love life. Within this group of three is Mio (Ayumi Yamatsu), a quiet and mature girl who lost both her parents tragically at a very young age, Hiroko (Hiroko Shimada) whose brief and angst-filled life has left her a nihilist, and Masami (Moe Ishikawa) who finally got (hot and heavy with) her new heart-throb boyfriend and is intent on keeping him.

Well, needless to say the Kokkuri session does not go well for the girls. Masami discovers that her new boyfriend is fooling around with Hiroko on the side, Mio learns that she will suddenly die sometime within the next month, and Hiroko storms out of the room before the proper closing chant is completed, resulting in Kokkuri-san hanging around them for the duration of the film. THEN things begin to go downhill. Fast.

I’m not sure I know what the message of this movie is. On the one hand we have three high school girls arguing and dealing with pretty average teenage stuff: young love and heart-break, childhood regrets, the trauma of death and divorce in the family. You can get all this and much better acted from The Breakfast Club. On the other hand, all of these issues are aggravated beyond end due to our naive, knee-socked protagonists’ foray into the occult. None of the (massive amounts of) dysfunction our characters experience is actually caused by Kokkuri-san. In fact I’m sure the invited ghoul was quite shocked at the amount of emotional baggage these three girls are carrying. (“Why can’t I just haunt a normal, well-adjusted person for a change?”) Our mysterious ghost simply stirs the pot and turns up the heat — to the boiling point — and then watches things degenerate into their ultimate conclusions.

So perhaps the intended lesson is simply this: Don’t dabble with the occult lest your already pathetic lives take an even greater turn for the worse!

In any event, this films literally wrings every drop of emotional despair out of its characters until all are left soaked and wretched in the end.

This film was a little too melodramatic for me and I’m still not clear on how the ghoul behind Kokkuri-san fits into this. I don’t think it will spoil anything to wonder aloud whether we simply have to assume that eye contact with someone during your childhood establishes enough of a connection so that the ghost of the other will be waiting for you at the moment of your death. Or is there a secret neither the narrative nor mother divulge regarding the relationship between young Mio and the girl in red she sees from the train? WHO KNOWS!!??

Version reviewed: Region 1 DVD with subtitles. Available in all mainstream US venues.

At least you’ll get to see what a Kokkuri-san game looks like. (Or you could just look at the screenshots above!)

There seems to be a lot of wrestling and arm flailing in bathtubs. In fact, I think ALL the action scenes here involve some form of water cat-fight.

Masami shows some high school b00bage, Mio’s stepfather (VERY) unsuccesfully tries to make out with her mom at the beach, and Hiroko and Mio contemplate the joys of Lesbianism.

One green skull for the difficulty you’ll face trying to put all the puzzle pieces into a coherent, rational whole.