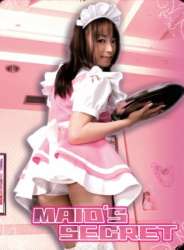 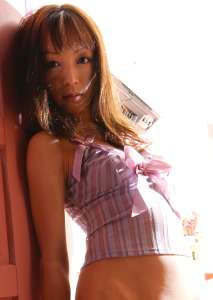 The film is rife with sex scenes of various sorts, interspersed with girls in frilly maid outfits and guys in whitey tighties getting hot wax dripped on them. My screenshots below don’t do the film’s content justice and are intentionally on the mild side lest this site transgress the Net Nanny filters.

Harumi and Misuzu are classmates who both have a crush on shy Keita. When they simultaneously approach him to propose becoming his girlfriend, he suggests they all return in one year’s time for his final decision. Knowing they must now wait a full year before obtaining their prized beau, each girl sets out to become the “ideal” woman for Keita. Harumi thinks is best to devote herself to becoming a servant to Keita and thus thoroughly immerses herself in Maid cosplay and role-playing. Misuzu opts to become a more dominant woman and quickly dons black latex and whips. And for the next year they both practice diligently at their chosen personas, all the while dreaming of the day they will thoroughly straddle Keita.

After a year’s time the three do indeed re-acquaint (in a way) and Keita must make his important decision of who he will choose as his beloved? Is Keita a closeted masochist? Or perhaps he leans toward Sadism? Or maybe he just likes rice balls!

Well this is definitely one for those who prefer their women at the extreme poles of the SM spectrum. There are several films available dealing with cosplay, but this one contains the most sex of those I have seen. A far more entertaining though non-sexual film would be Kamikaze Girls or even Peep TV Show. But we know you’re here for the bOObies and for that, Maid’s Secret will surely not disappoint.

Version reviewed: Region 1 DVD with English subtitles. This is currently available via all mainstream venues.

I guess you’ll gain some insight into the Maid cosplay movement, or at least the (gyrating) movements of someone in Maid cosplay.

Unfortunately, the subservient theme is taken to its Japanese extreme resulting in a rape scene.

Let’s just say even the Teddy Bear with a Strap-On gets the stuffing pounded out of him!