When Dr. Kuzumi moves his practice to the countryside in order to allow his wife to regain her health, little does he realize that the old mansion they have rented “possesses” a notorious history of its own. When a mysterious old woman repeatedly appears, apparently with the intent of killing his wife, what he initially believes to be hallucinations soon leads him to the local Buddhist priest who recollects for him the notorious history of the the house. This is a creepy classic horror tale which conjures up both a whirlwind of Japanese superstition and history. 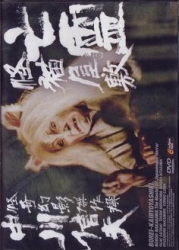 Director Nakagawa Nobuo (1905 – 1984) directed 98 films during his career, many of which were dedicated to the horror genre. Of those films, only a very few have become familiar to Western audiences, such as his 1957 Ghosts of Kasane Swamp, the 1959 Tokaido Yotsuya Kaidan, and his stylistically classic Jigoku (1960).

Nakagawa is a central figure in the early growth and evolution of Japan’s horror film trajectory, not merely due to the number of films he contributed to the genre, but primarily because of his relentless experimentation with visual styles and newly emerging cinematic technology. The film under review here, Borei Kaibyo Yashiki or Mansion of the Ghost Cat (1958) is Nakagawa’s first attempt to shoot a film in the newly available anamorphic/scope format with the help of cinematographer Nishimoto Tadashi — who (BTW) will remain Nakagawa’s principle cinematographer for many subsequent films including Nakagawa’s most well-known. Apart from experimentation with technology, the powerful use of visual styles to create ambiance and psychological focus comes through loud and clear in this film.

Though divulging this nearly amounts to a stylistic spoiler, Nakagawa here employs a radically creative stylistic flow as the narrative moves from present to past to present again. The film credits make clear that the central portion of the film is to be understood as a “jidaigeki” or historical piece, presumably from the Edo Era. The prologue and epilogue to this jidaigeki take place in the “present day” and amount to narrative bookends to the lengthier and more substantial middle. Rather than cast the present in color and the past in older hues, Nakagawa saves his color solely for the jidaigeki where the crimson red of blood and the ghastly pale of monstrosities come through all the more powerfully, while the prologue and epilogue are filmed purely in black and white, as if to imply the present somehow lives under the shadow of the past. The result is quite striking and, as hinted at above, caught contemporary audiences thoroughly off guard due to its counter-intuitive approach.

The tale here falls squarely within the genre of tragic ghost story, and centers wholly upon classic Shinto animism and superstition wherein the departed souls of humans and animals indeed may merge in the afterlife, resulting is a rather unholy and formidable breed of monster. (A more recent example of this can be found in the Ju-On series where little (departed) Toshio has basically absorbed the spirit of his departed black cat.) Here Nakagawa depicts a ghostly triad blended into a single entity comprised of one part cat, one part cursed human soul, and one part onryou or vengeful spirit intent purely on revenge.

The central jidaigeki portion of the narrative depicts the tragic and unfortunate chain of events which lead to the formation of this formidable monster and the generational curse which follows. Thus those in the “present day bookends” are merely experiencing the ghostly results of the far more descript and colorful past.

Though Dr. Tetsuichiro Kuzumi runs a successful private practice in the city (presumably Osaka), he has decided to move to the more rural (southern island) Kyushu in the hopes that his wife Yoriko’s tuberculosis might clear in the fresh air. With the help of Yoriko’s brother, they move into an old and somewhat delapitated mansion (yashiki�) large enough to accommodate both their residence and the new medical practice.

But from day one Yoriko is getting very bad vibes from the old mansion and repeatedly sees a very old woman intent on throttling her neck. Despite her many attempts to tell her husband of her experiences, he is all too eager to dismiss them as mere hallucinations brought about by her illness and the stress of moving. Its not until the nurse also begins seeing the old woman and Yoriko is routinely found lying unconscious that Tetsuichiro begins to open his mind to other possibilities.

Finally, after Yoriko’s brother admits that the mansion has a spooky reputation, he and Tetsuichiro visit the local monk who calmly divulges the entire demonic history of the house.

I highly recommend this film to any fan of “Japanese Horror” (J-Horror) — as long as YOU keep in mind the following:

This is a 1958 film, released (for example) the same year as US director Terence Fisher produced the classic version of Dracula starring Peter Cushing and Christopher Lee (though the 1931 film starring Bela Lugosi is indeed THE classic version). In other words, we’ve (all) come a long ways baby yet (serious) fans of the genre are forced to recognize the role and impact these earlier (and by now far less “scary”) films had in the formation of present day notions and depictions of horror.

Thus is terms of “scariness” this film may not cause a single hair on your glistening naked body to stand on end. But that, my friend, will never be the correct criteria by which this film should be judged by the likes of 21st century cyber literati such as ourselves. Instead, sit back and absorb Nakagawa’s remarkable trail of cinematic visual styles, Japanese Shinto superstitions and tragically karmic moral warnings.

Upon a moment’s reflection, you’ll notice that despite technological and cinematic advances over the decades, these three core elements remain central to even the most recent J-Horror films.

Though nothing is depicted, two rapes are implied. (This should be listed under “violence”, I know.)

Story and style-wise, this tale comes across quite strongly. Definitely a fun piece and a true keeper for j-film nostalgia fans.