When the beautiful wife of DNA Researcher Nagashima is tragically killed, he attempts to recreate her using an experimental treatment. The initial results look promising but then quickly spiral out of control when an ancient consciousness within the DNA is awakened and seeks to birth a higher order of being in the evolutionary scale. 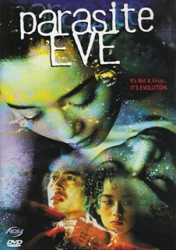 The title “Parasite Eve” comes from the popular 1997 Japanese novel by author Sena Hideaki (????). The following year, Sena’s novel was made into the film currently under review here. This theatrical version is directed by Ochiai Masayuki (????) whose other work includes The Hypnotist (1999) and the more recent Kansen (aka Infection 2005). Following the release of this film, “Parasite Eve” was once again reincarnated, this time into a series of popular video games for Sony’s PlayStation 2 platform.

The underlying Sci-Fi premise here is quite interesting, almost reminiscent of Akira in the awakening of a vastly powerful primordial consciousness. To pull this storyline off, Ochiai attempts alot of atmosphere and nuance, and only sparingly employs CG effects. The CG effects are decent and consist primarily of convincing conflagration and animate, self-conscious liquids. There’s some good talent here too. The researcher Nagashima is played by Mikami Hiroshi (????) who recently played the main character (the father) in Yogen (aka Premonition 2005), and Nagashima’s assistant Asakura is played by Nakajima Tomoko (????) who you will recognize as Isono in director Miike Takashi’s MPD Psycho (2000).

Professor Nagashima Toshiaki is a researcher specializing in DNA. In particular his work involves the mitochondria, its origin and its possible contemporary uses. His theory is that mitochondria was originally a parasite organism which so thoroughly embedded itself in its host that it now has become an integral part of the structure of human cells. Whereas mitochondria has its own DNA, a primordial, original strain of the parasite, referred to as “Eve”, may be someday discovered and unlocked.

Along with his research assistant Asakura, Nagashima has discovered a method whereby infusion of mitochondria into human cells can regenerate and heal damaged or deformed cells. The possible ramifications of this for those with degenerative diseases is astounding.

But immediately following this discovery Nagashima’s research is interrupted by the tragic death of his newlywed wife Kiyomi in a terrible auto accident. Nagashima’s mentality is shattered and his work grinds to a halt as he mourns this tremendous loss. However, when the hospital informs him that Kiyomi had requested to be an organ donor, he suddenly realizes what he must do — he will apply his new discovery to the DNA of his beloved in an attempt to recreate her.

But Nagashima’s experiments work too well and the replication of Kiyomi’s mitochondria accelerates at impossible rates, until it is clear that only the mitochondria, not the human cells, are growing. By the time he realizes what is happening, the new entity can move at will and possesses self-consciousness. In addition to retaining all its memory since primordial past, it has also formulated a devastating plan for humanity’s future, one which quickly proves to be simply the rawest and most heartless form of “survival of the fittest”.

This 120 minute film proved to be quite entertaining. As I said earlier the storyline and cast are pretty good. As with all detailed sci-fi stories like this, there are undoubtedly some loop-holes in the logic of the story but overall these don’t overwhelm the effectiveness of the tale.

Although I have categorized this as a “Sci-Fi Thriller”, I think it is an inaccurate description. The “Sci-Fi” part is certainly accurate, but this does not quite come across as a “thriller”. Nor is it “horror”. And it is more than mere “drama”. Suffice it to say that human capacity for love and emotion plays a decisive role in this film.

Brief animation on cellular biology 101 (reminded me of the little cartoon in Jurassic Park).

Some dissection scenes and plenty of humans bursting into screaming balls of flame.

One very WET love scene with a very sexy though non-nippled mass of curvaceous mitochondria!