First there was the 1997 novel Perfect Blue by author Takeuchi Yoshikazu. Then there was the 1998 anime version of Perfect Blue by director Kon Satoshi whose progressive style of anime caught both audiences and critics by surprise. And then there was this, a 2002 live-action version of the same. The general storyline of all these versions consists of a budding young starlet and a crazed, psychotic stalker. The 1998 anime version really took this general premise to extremes resulting in a mature and rather violent (and sexy) full-length anime feature. When rumor of a possible live-action version of Perfect Blue emerged, it was assumed that it would somehow attempt to mimic or expand upon its very popular anime predecessor. Such assumptions, however, proved utterly mistaken when Sato Toshiki, a director otherwise widely known for rather risque Pink films, unveiled this violence and nudity free rendition of Perfect Blue. 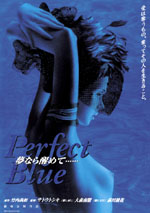 I cannot quite think of the correct genre to assign this film to. I believe it wants to be either a suspense or thriller, but to say that it is such is to wildly exaggerate the impact and narrative of this film. There were no moments of great suspense or shock, though a general sense of head scratching and bewilderment will undoubtedly accompany a viewing of the film. Narratively, its main goal seems to be two-fold: (1) a thorough exploration of the exciting tasks inherent in becoming a starlette, such as glamor photo shoots, studio recordings, and being pampered and adored, and (2) an exploration into the makings and gradual emergence of a psychotic stalker obsessed with said starlette.

Well it should come to no one’s surprise that I do not care about the exciting tasks inherent in becoming a starlette. If such tasks included slow and prolonged undressing in front of the camera, or lengthy dips in a tub of cocoa butter wearing skimpy or no clothing, well then yes, I might be interested. But alas, they do not include such things, at least not here in Perfect Blue. Instead we are given about as much excitement as would satisfy any fame-hungry junior high girl with stars in her eyes and dreams of hollywood cameos.

So that leaves me with the other theme, the development of a psychotic stalker. This indeed sounds far more promising, doesn’t it? I mean there must be one hundred cool ways a slightly fringe geek can go over the edge of sanity and into the full rage of an eye-twitching berzerkoid, right? (In fact this theme is explored in other films such as the truly strange Black House.) Well boys and girls, just wait until you see the bewildering and inexplicable “cool way” our mild mannered convenience store clerk is utterly transformed before our very eyes and is soon planning on doing away with our beloved starlette! Let’s just say this will make any guy think (at least) twice before becoming obsessed, perhaps even overly concerned, with anyone of the opposite gender!

Asaka Ai (Maeda Ayaka) is a budding starlette waiting for her big break to make it into the limelight. Under the dedicated tutelage of her manager Bando (Toda Masahiro) she shuffles from one photo shoot to the next, most often resulting in her image being used on various advertising posters. With the help of a catchy tune, Ai and Bando anticipate she will finally break out of merely poster appearances and into television commercials and from there, real stardom. The song is entitled If this is a dream wake me (Yume Nara Samete) and was written by Ai’s friend Hiromi just prior to Hiromi jumping headlong off a tall building.

NOTE: You will become intimately familiar with this song as it is sung by Ai a mere EIGHT complete times. This, of course, also had me looking for a tall building to jump off of. (This overly indulgent cinematic homage to a song which barely deserves a single listening — let alone EIGHT — rivals even the tune lust of Tokyo Drifter!)

Just when everything seems to be going her way, Ai encounters Horibe (Omori Nao – Ichi!!), a convenience store clerk who seems to know everything about her. And I do mean everything. As his complete knowledge of even the most mundane aspects of her life comes spilling out, she becomes seriously freaked out and wonders aloud if he is a stalker. This he immediately denies and informs her that he is simply living her. He confesses that after seeing Ai as a pitifully abandoned child many years ago (long story), he had decided he would live just like her in every respect. He would in a sense become her and thereby “care” for her.

Things get increasingly stranger and soon it becomes apparent that this world is simply not big enough for both Ai and Horibe… one of them will have to exit stage left.

What follows is a truly bizarre storyline which defies both logic and expectation. In other words you’ll likely be scratching your head saying “what the??” and wishing you had watched the anime version instead.

Well, as you may have surmised from my brilliant review, I found Perfect Blue to be both boring and anti-climactic. The narrative strand regarding the “starlette tasks” (as I call them) is really given way too much time. This would include (but not be limited to) the three separate music studio scenes, the three separate photo shoot scenes and the EIGHT renditions of “If this is a dream wake me”. (Personally, after all that I was singing “If this isn’t a dream SHOOT ME!“) Maeda Ayaka has a very cute pouty face and so a little bit of posing is tolerable, such as the bikini shoot (!), but let’s not go overboard here.

And poor Ichi! Oh that he would have shunned this role and lived forever unblemished in our minds as the crania-crushing kicking berzerkoid we all knew and loved. But now.. oh my. How will I ever forget the look on his face when he realizes he lost… THAT? How, oh how?

Enduring all of that makes this film’s conclusion all the more cruel as I waited for at least a modicum of redemption for the 103 minutes I had just sacrificed to the mocking gods of cinematic exasperation. But alas, these credits rolled while I was still waiting for an ending which made sense. (And I’m still waiting. In the dark. Alone. So alone.)

Besides the fact that this title appears elsewhere in history, absolutely nothing of note here.

One oft re-enacted plunge to the pavement. One back-stabbing.

The DVD cover shows more skin than this entire film. (I kid you not.)

Despite suggesting the universe’s strangest cause for becoming a stalker, this doesn’t earn a single green skull.