This is a 9 episode collection of Japanese horror vignettes, all either directed or supervised by CG/FX guru Masahiro Okano. With stories ranging from psychedelic sci-fi to traditional folk horror, from the sentimental to the macabre, this collections presents a number of entertaining tales with impressive cinematography. In relation to the other Japanese horror anthologies released in the West, this collection stands near the top in terms of cinematic quality and visual polish. 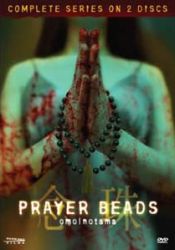 Directorial credit for Prayer Beads is given to Masahiro Okano who wrote and directed five of the nine episodes contained herein and supervised the production of the remaining four. Okano’s primary work has been within the field of visual and special effects for such films as Senrei (aka Baptism of Blood, 1996), Shiryoha (aka Dead Waves, 2005) and Jame Cameron’s Abyss (1989). With Prayer Beads he makes his directorial debut into mainstream Japanese horror.

This anthology originally aired on Japanese television in 2004 and shortly thereafter hit Japanese theaters through Shibuya Cine. It was released in a Region 1 subtitled version in early 2007 by Dark Sky Films. The Western release consists of a 2-disk set containing nine 30-minute episodes for a total running time of 270 minutes.

As with all anthologies, the collection runs the gamut in terms of content and narrative. Stories here range from the humorous to the strictly horrific and offers audiences a variety of cinematic styles, all of which come across as quite polished presumably due to Okano’s skilled hand at visual presentation. At 30 minutes apiece, there is sufficient room for each narrative to be adequately drawn and depicted (unlike some other horror collections whose tales are mind-numbingly brief). Amongst the genre of “Japanese Horror Anthologies”, a few have stood out above the rest including the Kadokawa Horror and Mystery Tales (2003) and Kazuo Umezz’s Horror Theater (2005). Due to its polished cinematics and decent range of entertaining tales, Prayer Beads rightly belongs alongside these upper-tier exemplars. 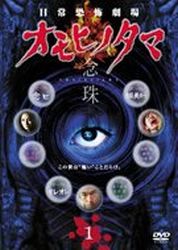 Joining Okano in the director’s chair are Shigehito Kawata who has worked previously with the Gundam: Evolve anime films, Toshikatsu Kubo and Naoki Kusumoto. Relatively speaking, these three all have far less experience than Okano in terms of work in Japanese film and similarly are making their directorial debuts here.

The Japanese title of this collection is “Omoinotama Nenju”. “Omoinotama” is a colloquial term and “nenju” a formal Buddhist term, both of which can be translated “memory beads” referring to Buddhist Prayer Beads normally used for Buddhist meditation or prayer. Most nenju contain 108 beads (or fewer beads with 108 facets) representing the 108 earthly desires or “bonno” which must be overcome according to Buddhist theology. Adherents meditate consecutively upon each bead, specifically aiming their prayers at overcoming the particular desire or sin the individual bead represents.

Each tale within this collection is referred to as a “bead” and so we are given here a narrative string of “nine beads”. I’m afraid I don’t know what the intended relation between the original 108 and the limited nine are, other than 9 x 12 = 108. (??)

There is perhaps one clue to this, which I have not yet been able to fully unravel. Prior to the title and credits of each of the nine stories, a large bead is displayed marked with a very archaic Chinese/Japanese character. By archaic I mean so old that the characters no longer belong to spoken or written Japanese, nor are found in modern kanji dictionaries. These archaic characters now generally exist solely within the texts and literature of Buddhism. And this fact makes sense since we are here dealing with Buddhist Prayer Beads whose meanings have been laid out long ago. This piqued my interest, wondering if perhaps each character refers to a specific desire or sin somehow depicted in the story itself. Unfortunately I have not been able to locate a list of the 108 sins with their corresponding archaic terms, so the conclusion to this puzzle will have to wait. The folks in charge of subtitling the collection seem to have taken a much easier approach, settling on a suggested (and simple) transaltion of “bead one”, “bead two” and so forth.

The following are brief descriptions of the nine “beads” contained in the Prayer Beads collection:

This is a moody and creepy tale involving a woman on the edge of her sanity, her suddenly missing husband, and a concerned neighbor. Their seemingly disparate lives come to a devastating convergence when an unexpected connection amongst them is uncovered. This is a ghost story taking place within a very urban setting and contemporary circumstance, and is thus aimed at driving home this entire collection’s motto: “The world we daily live in is brimming with horror”.

On several levels this is a tale about spiritual fallout and retribution caused by transgressions against others. And goopy zombies.

A young (and horny!) couple set out for a remote weekend getaway in a mountain cabin. But when they arrive and need assistance, they learn the landlord won’t leave his house after dark due a local superstition. Needing some food and refreshment (to quiet his increasingly annoying girlfriend), they head out into the pitch black night in search of a convenience mart. By night’s end, all they are able to locate is an old and seemingly abandoned vending machine with a few remaining cans of beverage. Little does our couple realize that the energy drink this machine offers is akin to a trip dose of viagra. And then some!

This tale falls squarely into the genre of “arrogant tourists who fail to take local superstition seriously”.

Yuki and his more volatile yakuza-wannabe friend are enjoying the quick rewards of a phone fraud scheme targeting the elderly. By simply calling and saying “It’s me”, the victim eventually suggests a name (“Oh, is that you Fred?”). Once they have a name, they describe some emergency requiring the victim’s immediate monetary help, saying a friend will be over shortly to collect the cash. Things run smoothly until local yakuza catch wind of the scheme and Yuki goes to collect cash from a particularly senile old woman who continually mistakes him for her own grandson.

To me, this seemed the strongest and most impressive story of the entire collection. The sub-themes of yakuza violence and family sentimentality come through fully, and there is a really good twist involving a rather unique depiction of Shinto/Buddhist belief. Interestingly, director Naoki Kusumoto’s other story in this collection, which in my estimate is equally creative though not nearly as impressive, also deals with the societal and spiritual role played by grandparents.

This is a ghost tale built upon Shinto/Buddhist notions of afterlife and the central importance of the “O-bon” or death anniversary rituals.

After the bizarre, self-destructive behavior of a co-worker and increasing migraines, an otherwise aspiring surgeon finds his career on the brink of complete breakdown. Following the only path which opens to him, he subjects himself to back-alley psychedelics whose horrific visions he all-to-late understands.

This tale falls within the “sci-fi horror” genre with Matrix-like overtones.

Friends from an internet chat room decide to meet for the first time and go on a weekend trip into the mountains to pick mushrooms. After a day’s drive to their destination they hike several hours up into the mountains in pursuit of the region’s renowned shrooms. But as night falls, they fail to heed an ominous messenger’s warning about a certain shack which should be avoided at all costs. Of course, they stumble upon the shack and ask to spend the night, thereby discovering for themselves the severity of the mysterious warning.

This also falls into the genre of “arrogant tourists who fail to take local superstition seriously”, but with a couple wicked twists (which I won’t divulge). Unlike the “Vending Machine Woman” tale above, this one relies on the very well established, classic Japanese folk lore of “Yamamba”.

Local gossip says young Ikou is bound to bring you bad luck. His kidergarten burned down, his parents died in a fiery crash, and a condescending neighbor just got run over by a bus. Now that he has come to live with his grumpy grandfather, everyone seems to be unhappy. But attention is suddenly diverted from him when an overly cute seal suddenly appears in the nearby Edo(gawa) River. The residents and local media dub the creature “Eddie” (actually, “Edo-chan”, after the River, get it?). Little Ikuo seems to be the only one less than enthralled by the cute visitor. When more people who have had run-ins with Ikuo turn up with their heads missing, it looks like he is destined to be a social outcast forever.

This tale is basically a warning against a knee-jerk disgust and persecution toward someone with creepy supernatural gifts. The public’s eager adoration of the cute yet mysterious “Eddie” is juxtaposed their similarly eager repulsion of Ikuo’s mysterious scowl. But as we all know, you should’nt judge a book by its cover.

When beautiful Yumika is violently murdered at the hands of a hooligan, her grandparents set out to track him down. It would seem a rather daunting task, but these grand folks are armed with some uncanny and formidable skills. Its not long until they are on the killer’s trail with an explosive conclusion in mind for him. (Get it? ha.)

This is director Kusumoto’s second “granparent” tale in this collection. Here he explores the possibility and outcome of an entire family possessing psychic abilities.

Young Shota’s life is dismal indeed. His father is abusive, his parents fight endlessly, he’s bullied at school, and now he is in very deep water with a couple ruffian classmates for ratting them out to the principal. He’d simply like to curl up and hide from life, until he stumbles upon a children’s cartoon promising prophetic results. The cartoon’s main character is a humorous, samurai cat named “Nyan-chan” (In Japanese, “nyan” = “meow”) who promises a cartoon character boy, also named Shota, to grant three wishes. Its not long thereafter that real-life Shota discovers the cartoon overlaps with reality and that having one’s wishes granted can have grisly outcomes.

This is an interesting child-centric tale along the lines of Gakkou no Kaidan (1995).

An abusive father and husband brings his family and the entire storyline to a irrecoverable breaking point. This last tale attempts to tie together all the prior tales into a rather inexplicable and confusing whole. There didn’t seem to be much point or message to this tale other than attempting a wrap-up of the series with an emphasis on the collection’s motto: “The world we daily live in is brimming with horror”. Thus it shows the survivors of the previous episodes mingled in with the crowd gathered around an apartment as the SWAT teams descends in search of a serial bomber. (???) Don’t ask me. I haven’t got a clue.

This is a decent collection of polished horror tales. Some are clearly better than others (and the final tale defies explanation) but each can easily stand its own ground in terms of an interesting storyline and eye-pleasing cinematic styles. This is easy to get your hands on and may suffice to fill your craving for some low-key Japanese horror.

A couple interesting insights into culture intuitions regarding Shinto ghosts and mountain ghoulies.

Plenty of goopiness and some shlock gore.

Two tales involving hot lingerie’d babes in bed, neither of which arrives at a “happy ending”.

Nice collection of a hodge-podge of tales and styles.