This contemporary remake of the Female Convict Scorpion saga pictures Sasori as a successful Los Angeles Interior Designer! But her color samples all turn blood red once she is imprisoned for murder and has to fend off the fiercest LESBO on the cell block. Fans of the original Sasori are sure to guffaw all the way through this one. 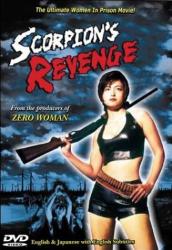 For those unfamiliar with the original Scorpion (Sasori) films of the early 1970s, you may want to start here for background..

For the rest of you, get down on your knees, put your hands together, and THANK G*D I am willing to watch this stuff so you don’t have to.

This film is directed by Gotoh Daisuke whose other films include Zero Woman (1995) and Zero Woman: The Accused (1997). It is therefore safe to assume that Gotoh has a penchant for nipple-filled crime drama. So one day he comes up with a GREAT idea. It probably happened something like this:

Gotoh: I think we should remake the Female Convict Scorpion film, placing Matsushima Nami in a contemporary setting.

[inner child: I STRONGLY recommend against this..]

Gotoh: Hell, how about a foreign contemporary setting like 1997 Los Angeles?

[inner child: We are going to HELL.]

Matsushima Nami is here played by Saito Yoko whose only other (likely) recognizeable film role is in Miike Takashi‘s Salaryman Kintaro (1999). Here Saito plays the young woman Matsushima Nami who is wrongly accused of the death of her fiance, Sugimoto (played by the ubiquitous Sugimoto Tetta). The circumstances surrounding the death of Nami’s 1997 boyfriend are quite different from those of the original’s 1972 boyfriend (whose name was the eerily similar Sugimi), but by and large, these two tales play out in pretty much the same way, even down to Nami’s everlasting (and painful!!) effect on one of the warden’s eyeballs. (!)

But let’s be honest. The appearance and aura of the modern Saito Yoko ranks nowhere near that of Revenge Queen Kaji Meiko. With Kaji at the helm, the transformation of an innocent, betrayed woman into an ice-cold and formidable demon was truly plausible, due vastly to her acting ability and steely-eyed countenance. Saito, on the other hand, carries no such aura and thus neither carries the audience into believing she could possibly accomplish what we see her here doing. The fact that the original Scorpion films and other exemplars of Japan’s early 1970’s “bad girl” genre were successful predominantly through the presence and plausibility of the lead actresses is something every audience member intuits after watching these, and is thus clearly something director Gotoh should have known when casting the role of his modern day Matsushima Nami. But this reality seems to have been lost on Gotoh, who instead opts for an ineffective, buxom, doe-eyed heroine.

And so Gotoh here presents you with a film in which there will not be one moment wherein you (or I) believe that Saito-Nami is remotely capable of the fetes she is here attributed. Except, perhaps, her oft-repeated nude gyrating/copulation scene which (apparently) symbolizes her pre-prison bliss/naivete. That scene, I admit, I simply choose to believe. heh.

Wrongly convicted of the mysterious death of her boyfriend Sugimoto, once successful Los Angeles interior designer Matsushima Nami finds herself prisoner 701 within Orange County Prison, run my a narcissistic and libidinous Bible-quoting warden whose cross-bow wielding guards shoot prisoners at the slightest provocation (like yawning during his pep talks, for example). And while she quickly adapts to the gropings, group showers, cafeteria knife attacks and LESBO ACTION apparently running rampant in the Los Angeles Department of Corrections, were it not for the blind, Japanese-speaking harmonica player in the next cell, this tale would simply be a Z-grade foretelling of the Martha Stewart prison saga.

BUT NO! Armed with her unique, steely determination and a harmonica, Nami is not only able to overpower her LESBO enemies, the warden (OUCH!), and armed prison guards, but is also empowered to scale the prison walls undetected, all the while bringing her blind, highly nonathletic, musical friend with her. Once outside the prison walls, these two find themselves in the vast desert surrounding the Orange County Prison (???).

Will these two petite, thirsty and bewildered ladies survive their trek through the vast deserts of Los Angeles? And should they possibly survive, will they find the opportunity to wreak violent revenge upon the unjust and haughty fellows responsible for their wrongful imprisonment?

Oh brother. Simply put, this film, compared to the original Scorpion films or even classic examples of the “Women In Prison” (WIP) genre, comes across as so tepid that I hang my head in guilt simply by watching it. It is obvious that Gotoh attempted an internationally marketable film, shifting the spoken dialogue back and forth between Japanese and English and choosing a major USA city as his setting, but this goal unintentionally comes across as nothing short of comedic due to the huge gaps of sheer implausibility he creates for both Japanese and American audiences’ sensibilities. From the Bible-quoting warden (via Stuart Rosenberg’s “Cool Hand Luke”) of a HUGE metropolitan prison facility to the bizarre geographical assumption of desert landscape within the Los Angeles Basin to the core suggestion that a petite, prim and proper, stiletto-heeled professional Japanese woman would so easily gouge someone’s eyes out using a blunt harmonica, plausibility and cultural sensibility seem far from Gotoh’s imagination or intention.

[SaruDama Disclaimer: For those of you who have been bludgeoned and/or blinded (partially or wholly) by a seemingly “prim and proper” Japanese girlfriend, please accept my sincere apologies for the prior optimistic generalization.]

All said, if you are a fan of the original Scorpion films, this may indeed be fun watching just for the entertainment of seeing a poorly constructed knock-off. (The result undoubtedly being greater appreciation for the original.) If you are NOT familiar with the original films, and are approaching this in the hopes of seeing something culturally innovative in terms of a contemporary Japanese approach to the WIP genre, I urge you, RUN LIKE HELL and don’t look back.

Despite this film’s relation (in title only) to the original 1970’s Scorpion films, you will not only learn NOTHING culturally relevant here, but may in fact lose brain cells in the process.

Just your everyday scenes of arrows through appendages, harmonicas through eye-balls, and vicious LESBO knife fights in the prison cafeteria. In short, nothing you haven’t seen before.

This may be entertainingly bad for those quite familiar with the original Scorpion films. In all other scenarios, this is pure crapolla.