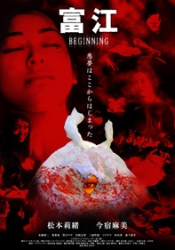 Just when you thought it was safe to date girls named Tomie!

Three years following the fifth and (ahem) “Final Chapter” of the Tomie saga, the director of the 1999 original Tomie, Oikawa Ataru has reemerged with Tomie: Beginning in which, according to the trailers, “the nightmare starts here”. Those having seen the prior five Tomie films generally agree that Oikawa’s 1999 original was not the best of the collection, but he did have the benefit of working directly with author Ito Junji (who actually makes an appearance in the film) on the casting and direction.

In Beginning, Oikawa makes another rather valiant attempt to depict the horrendous Tomie character of Ito’s manga. In so doing, he adds a few effective pieces to the cumulative picture of Tomie thus far drawn in the five prior films. For example, relative to the prior films, Beginning:

The list above constitutes the real contribution Beginning makes to the Tomie legacy. And these likewise constitute very good reasons for Tomie fans to see this film. But in the end and try as he might, Oikawa is still unable to qualitatively distinguish himself from the pack of directors attempting Tomie.

This story unfolds through the eyes and narration of Matsubara Reiko, a recent graduate of a high school class which had the utter misfortune of welcoming a new student, Kawagami Tomie. When Reiko and her classmate Yamamoto meet up in their former homeroom, the entire school is in shambles. The teacher is rumored to be in a psychiatric ward and several of their fellow students committed suicide or were met with grisly demises. (Yamamoto himself seems to have misplaced an eyeball!) Sitting in the litter-strewn classroom, they recount the immediate and overwhelmingly destructive presence Tomie manifested, resulting in their current dazed state of affairs.

The story which ensues will be familiar to Tomie fans. Male friends fight each other over the attention of the pheromone goddess Tomie and females come out with claws exposed once their boyfriends start drooling over her. But then perhaps uniquely, Tomie: Beginning explores how Tomie aggressively uses male obsession to exact revenge upon her female enemies, thereby tightly holding the entire group under her (VERY) oppressive demonic shadow. With all males in the vicinity acting as her minions and all females sitting paralyzed in fear and misery, Tomie laughingly doles out cockroach tea and maggot cookies (yum!) to her helpless victims.

And then, as we all know from experience, those under her shadow eventually rebel in rage-induced murderous ways, cackling with faces splattered in her blood. And as we also know, she soon reappears, driving even deeper into madness those she had driven to murder.

In Beginning Oikawa significantly increases the gore factor from his 1999 version and here includes plenty of knife/sword violence upon Tomie, followed by much spraying blood, loss of limbs (and ear), and a ritual dissection performed amidst giggles by the homeroom class and teacher culminating in a loud crack as they snap Tomie’s head clean off by brute force. (???) In addition to this gore, he also tries hard to demonstrate those monstrous transformations which truly characterize Tomie, suggesting here for example that even the blood of Tomie eventually attains self-consciousness.

But the visual emphasis spent on the “gore” factor greatly outweighs the sophistication of the “transformation” factor and I have a feeling that most viewers will (or should I simply here say “I did”) walk away with the sense they watched a (wannabe) schlock-gore film revolving around the Tomie character. In other words, much more time is spent on the cruel demise of Tomie than is on her monstrous ability to rejuvenate from even the most traumatic states. Instead, following a very graphically depicted death or mutilation, Tomie quite suddenly appears whole again.

Now, please keep in mind the list of positives I provided above in order to balance this critique. This film is indeed far from a failure. But within the spectrum of the prior five films, most reviewers I have read (including myself) sought and valued a monstrous Tomie over a merely hacked-to-pieces or lingerie-adorable Tomie. (As I have said elsewhere) The Tomie persona is ultimately grounded in Ito Junji’s vision of a narcissistic obakemono (monster!) which men are helplessly drawn towards. Thus the emphasis of a depiction of Tomie should be upon the monstrous rather than the fact that she can be killed. And indeed those of the five (now six-seven) films which attempted this emphasis generally drew the highest praise.

Admit it! If you’ve seen the other five Tomie films (or at least every one you could get your hands on) you’ll need to see this one too. For those of you in this situation, Beginning has several notable strengths (corresponding to the list I outlined above) but will likely conclude in that same ambiguous sensation we experienced at the end of most Tomie films, a sensation which strongly suggests “I know there is more to Tomie than that“.

But by now, you and I are quite accustomed to that sensation, and so its possibility should certainly NOT be a deterrent to watching this SIXTH installment of the Tomie collection.

One final comment on the notion that this film describes Tomie’s “beginning”. It does not. At least not in the sense you think it ought. You may recall (I certainly do) the rather deceptive manner in which Tomie: Forbidden Fruit was advertised, suggesting that “forbidden fruit” implied sensuality when in actuality it referenced the fact that a character ate a persimmon (the connection being, fruit lovers, that some circles believed persimmons to be the “forbidden fruit” of Genesis 1, blah blah blah). Well, that same anti-climax caused by the persimmon is coming your way if you think “beginning” means “THE” beginning. It doesn’t. Instead, it means “A” beginning and refers back to my earlier statement that this film posits a (scientific) theory as to how Tomie rejuvenates. Thus, the beginning here refers solely to a thorough description of her rebirth (abilities) and has utterly nothing to do with the “past”, especially not Tomie’s supposed origins in Meiji or pre-Meiji eras. (That the trailers suggest otherwise by depicting a historical-looking, kimono-clad Tomie is, alas, persimonny deception.) I just thought you should know that.

The cultural value may be purely due to curiosity as to how director Oikawa will handle Tomie second-time around, 6 years following his original film.

In addition to her classmates literally dissecting Tomie by hand in a rather horrific ritual, there is some graphic sword and knife violence, and plenty of spraying blood.

Not even forbidden fruit! (get it?!) And no, seducing the teacher on top of the ping pong table doesn’t count.

More positives than negatives here for fans of Tomie. Good additional insights into the Tomie legacy, but this film does not break away from the pack.