Genre: The Film That Cannot Be Killed!

I’m running out of witty intros for Tomie films! Here, Tomie not only turns out to be the innocent and lovable protagonist, but also delivers a heartfelt anti-penile plea for the destruction of all males on the planet! This latest film effortlessly continues the almost permanent state of disappointment faced by Tomie fans. 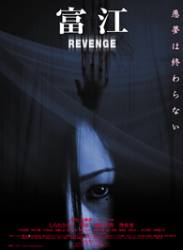 Well, by now you surely know the routine: A new Tomie movie comes out and titillates fans’ hopes and dreams that perhaps AT LAST we might be delivered a really good depiction of this ghoul girl. But ALAS, like so many times before, fans will walk away from seeing this with yet another forlorn expression on the very sad faces.

Tomie Revenge, the film under review here, was released one week following the release of its companion, Tomie Beginning. Both films are directed by Oikawa Ataru, the director of the original 1999 Tomie. In the six year interim between the original and these latest films, one would think that Oikawa has had enough time to adequately contemplate a more sinister and effective vision of the Tomie character. One would think.

But the fact of the matter is that Oikawa’s view, particularly in the current film, has softened considerably. (Perhaps he too has fallen under the hypnotic spell of Tomie!) This seems to be the inevitable trajectory of over-sequeled young women in Japanese horror. Just as the terrible and terrifying Sadako of the original Ringu turned out to be a sweet, loveable girlfriend who only wanted to be an actress (!?) by the fourth film (Ring 0), so too here Tomie undergoes a major publicity improvement, becoming the perky, cheerful girl everyone wants to snuggle and adopt. (Heck, even I wanted to take her home, dress her in a frilly little doll’s outfit and…).

For those of you from JUPITER, the Tomie character is based on the manga by the same name by horror-manga artist extraordinaire Ito Junji. To date there have been seven Tomie films of which this is presumably the last. (We’ll see.) Some of these have been far better than others, with Oikawa’s latest attempts unfortunately ranking very near the bottom of the list (though not quite as low as Tomie: Another Face… but close).

In Tomie Revenge (as in Tomie Beginning), Oikawa trades in creepy atmosphere and a truly spooky girl for a rather mediocre and non-eventful storyline interspersed with a couple momentary schlock-gore scenes which appear so suddenly and out of the blue that you may feel the urge to giggle.

While driving along a desolate mountain road in the dark of night, Dr. Kazue Suma slams her car into a naked young woman running across the road. After giving her the evil eye, the mysterious nudie then streaks back into the woods. The doctor’s search for the presumably injured girl leads to an abandoned cabin in which she finds a different unconscious girl who is then brought to her remote hospital.

Even a full year after the incident, the young girl has failed to regain her memory. The hospital staff have named her Yukiko after the snow that fell on the night of her arrival (yuki = snow), and she flits happily around the hospital grounds, bringing joy and smiles to everyone she meets (yada yada yada).

BUT THEN (!) two gruff detectives from the “Public Protection Department” show up to ask Dr. Kazue a few questions. After explaining that the Public Protection Department “deals with the protection of the public” (!) they get to the point of their visit. They have been given the task of investigating the “Tomie Files”, all of which involve a young woman, the same young woman, who is repeatedly killed in a fit of jealous rage and then mysteriously reappears. If that’s not weird enough, they believe that Tomie can somehow clone herself with her blood, slowly transforming her victims into mind-numbed duplicates of herself. This, of course, constitutes an issue of “public protection” the likes of which you have never seen, especially if Tomie got her hands on someone really important like a major political leader or, you know, somebody important like that.

Through a mysteriously unexplained leap of faith, they confess that they suspect that the girl Yukiko who was found in the woods may have some clues about Tomie. Will the good doctor allow Mulder and Scully to interview everyone’s favorite memoriless mascot and thereby possibly save the WHOLE WORLD?

In addition, Dr. Kazue apparently finds irrelevant (and unmentioned) the fact she found a video tape in the cabin, taken by a self-imploding group of young men fighting over “Tomie”. One raging confessor felt the need for an on air explanation that Tomie is “REPLICATING HERSELF TO INFINITY IN THESE WOODS!! SO BEWARE!!”. And as terrifying as that sounds, he is correct! At least if by “infinity” he meant two, but that’s not the point! Tomie or two is somewhere out in the woods driving boys crazy. And now what are you going to do about it???

And just who is the amnesiac nymph Yukiko and what deep memories lurk in her annoyingly perky skull?

To be honest, this one barely gets off the ground. The film is edited as if it were intended for television and the cinematic styles range from overwhelming to anger-inducing. There is MAJOR usages of diffused lighting (which is some scenes feels like looking into a steamy mirror) and camera motion on still subjects. If anything, the film is over-stylized and under-developed in terms of content.

In addition to the X-Files motif, there is a strong reminiscence of The Blair Witch Project, as the unfortunate souls in the abandoned cabin retained enough mental composure to record their experiences on video while providing plenty of explanatory, sometimes weepy, narrative looking straight into the camera.

The entire feel of this film is that of Oikawa simply going through the motions half-heartedly. There is no sophistication or nuance here, nor any developed storyline. Instead you get a hodgepodge of small ideas thrown together in a wholly unconvincing manner, all under the guise of “horror” by adding a couple over-the-top Z-grade, low-budget schlock-gore scenes.

Of his now three Tomie films, this is undoubtedly Oikawa’s worst.

Film number SEVEN in the Tomie series. This is nothing to write home about.

Finally! Sexy little Tomie gets NAKED (!!), and then what happens?? … She gets run over by a car.