When student revolutionaries of the Red Army held a woman hostage in the remote and snowy mountains of Karuizawa, Nagano, the National Tokyo Police were called in to oversee the incident despite the objection of the local Nagano Police force. This film recounts the true events surrounding the 1972 Asama Sanso Incident and is based on the published memoirs of Sassa Atsuyuki, the Tokyo Police commander in charge of the hostage’s rescue. 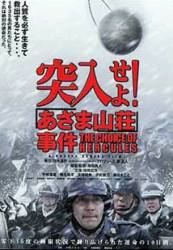 In Japan the 1970s was characterized by widespread student revolts fueled by the communist sentiments of the Japanese Allied Red Army (Rengou Sekigun). The violence and social impact of this student movement rocked the nation as the nightly news was filled with stories of homemade bombs going off at police and governmental headquarters and culminating with the very dramatic student takeover of Tokyo University.

Japanese historians generally regard one particular incident (jiken) as marking the end of this national student movement due to its crossing the line of popular decency, causing even members of the movement to question their cause. The Asama Sanso Jiken captivated the nation as every news outlet had its cameras pointed at a ten day standoff between a radical off-shoot of the revolutionaries and national police in the remote mountains of Karuizawa, Nagano.

The lasting impression of this standoff is represented in numerous films depicting the event, several of which are accessible to Western audiences and whose titles are perhaps familiar to you.

The basic (true) story of the Asasma Sanso Incident consists of the following TWO details:

(1) In February 1972, a small group of extremists confined themselves in a mountain cottage called “Asama Sanso” in a ten day standoff with police. The group held the wife of the cottage owner hostage and during the standoff refused to declare whether she was still alive or not. On the tenth day, despite significant obstacles due to the harsh winter conditions, the police stormed the cottage using a wrecking ball, water cannons and sheer force. During the raid two police officers were killed by snipers and 24 injured. The hostage and five of the student revolutionaries were captured alive.

(2) Following the raid it was discovered that the group of radicals had actually brutally killed off a number of their own weaker members in a “purge” during the most difficult moments of the standoff.

It was the group’s disregard for the life of an innocent woman bystander and the sheer debaucherous self-destruction which caused a moral repugnance in both the public and other student revolutionaries, and thus is said to mark the collapse of the momentum of the student movement.

As I mentioned earlier, a number of films depict this situation, though interestingly no single film seems to depict BOTH aspects of the narrative above. More often than not, they focus solely on the group’s self destruction and leave out entirely the matter of the woman hostage and the ten day siege culminating in the demolition of the cottage and the group’s arrest. Such is the case for director Takahashi Banmei’s 2001 Hikari to Ame which attempts to recreate in realistic terms the brutal peer dynamics whereby friends can kill friends in the name of ideological purism. Also in this vein is the far more violent and extreme 1997 film Kichiku Dai Enkai by director Kumakiri Kazuyoshi whose fascination with the brutal self-destruction hearkens back to his watching the nightly news analysis of the assassinations as a child. (A related film in this category is Wakamatsu Koji’s 1972 Ecstacy of the Angels (Tenshi No Koukotsu) dealing with the general breakdon in the student movement, though not in relation to the Asama Sanso Incident.)

In stark contrast, the current film, director Harada Masato’s Totsunyu seyo! Asama sanso jiken tells the tale entirely from the perspective of the police and deals exclusively with the difficult ten day standoff and the rescue of the hostage. No mention is made of the inner turmoil or self-destruction of the group of radicals.

This film is based on the published memoirs of Sassa Atsuyuki from which the film takes its title. Sassa was the defacto police leader of the assault on the stronghold and in the film is played by Yakusho Koji. Following these events, Sassa went on to become Director General of the Cabinet of National Security Affairs and was for a while in the national spotlight for his successful efforts at Asama Sanso.

Since the memoirs are obviously from Sassa’s personal perspective, he clearly comes out as the hero in both the memoirs and this film. And in this sense, the victors do indeed write the history. As a leading figure of the National Police Force (MPD) brought in from Tokyo, Sassa’s story recollects the rather fascinating and frustratingly ineffective attempts of the National police to work in cooperation with the local Nagano Police Force (NPA) and other competitive Tokyo Anti-Terrorism Task Forces. The film’s subtitle “Choice of Hercules” refers to the tantamount decision ultimately taken my Sassa to take control of the rescue efforts, despite opposition from all (police) sides, in the face of their increasing deaths and failure. (The English phrase “The Choice of Hercules” is actually part of the original Japanese title of this film.)

At slightly over two hours, this film deals almost exclusively with the sheer difficulties of power politics, ineptitude, and the incredibly harsh winter conditions permeating this rescue effort. And while this particular retelling of the story is undoubtedly one-sided (in Sassa’s favor), it nevertheless provides a very fascinating and informative addition to the narratives drawn in the other films dealing with the Asama Sanso Incident.

For those interested in fact-based films, this is indeed a good drama and wholly compliments (by providing an alternative perspective) the other films you will see on this topic. The film was nominated for nine awards at the 2003 Japanese Film Academy Awards. (Harada’s earlier 1999 film Jubaku also starring Yakusho Koji and a number of the cast here was likewise nominated for 12 awards at the 2000 Japanese Film Academy Awards, 8 of which the film won.)

This is definitely one to catch if you can for educational and entertainment purposes. However, to my knowledge this is not yet available in a subtitled version other than the original Region 2 DVD (which has English subtitles).

One-sided retelling of the infamous Asama Sanso Jiken, from the police’s perspective.

Some gun and sniper bloodshed.