Under the Carp Banner (Sano Kazuhiro 1992) 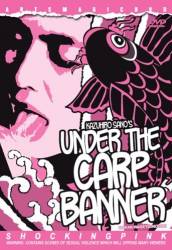 Kokuei was one such studio which consistently promoted unique and controversial material by its directors. And as mainstream popularity for such films significantly waned in light of the looming economic bubble and the advances of the new video (VCR) technology (pr0n!), several directors of pink decided to turn their attention toward producing more individualized, experimental pink films.

With the ever-present threat that their funding could dry up at any time, making their current film their last, four directors in particular began churning out films which fell well outside prescribed, traditional pink territory. They quickly became known as the “Four (Heavenly) Kings of Pink” (pinku shi tenno / ピンク四天王 ). These four were Takahisa Zeze, Toshiki Sato, Hisayasu Sato and Kazuhiro Sano, the director of Under the Carp Banner. (Btw, this group is also commonly referred to as the “Four Devils” depending on how the Japanese is translated into English.)

Thus what we have in Under the Carp Banner is an independent pink film produced under the auspices of Kokuei Studio and directed by Sano, one of the “Four Kings of Pink”. Sano originally intended the film’s title to be “Under the Carp Banner” (Koinobori hatameku shita ni), but Kokuei decided to release it under the far more titillating, pink-centric title “Molester: Indecent Peeping” (Chikan Waisetsu Nozoki). The studio’s choice of title was certainly more indicative to audiences that they were in for an erotic film, but is hardly accurate in its description of what happens in the storyline. There is no scene of “molestation” and while some “peeping” is involved, this is not a tale about a voyeuristic peeping tom (or Tomoko for that matter).

The film has a 60 minute running time. This was standard for such films which often billed in theaters as triple features. Another pink standard which the film retains is the requirement of a sex scene every 10 minutes or so. This means viewers are in for a lot of flesh. Adherence to these two standards meant that most pink films were simply all about the SEX, with banal or meaningless “plots” holding those scenes together. What distinguished the “Four Kings” from the other directors in this field were their explicit decision to focus on the albeit short plots rather than solely the sex scenes. And the current film is an excellent case in point of such a decision.

In Under the Carp Banner, Sano wraps his several sex scenes in a very strongly depicted narrative focusing on Japan’s contemporary political and social ideology. His tale consists of 6 groups or types of characters, each representing a different stage or perspective in modern Japanese society. The groups are introduced sequentially as the storyline proceeds. Interestingly, Sano uses the 10-minute sex rule to introduce the various groups into the narrative, by allowing them to stumble upon and observe ( or “peep”) at a libidinous romp in progress. Three of the five groups are introduced this way using three separate sex scenes.

As mentioned, various segments of Japanese society are represented by characters. First and foremost are the highly urbanized, Westernized couple who occupy a social fringe fueled by drugs, rock-n-roll, sex and rebellion. Exemplifying the value-less direction Sano sees his current generation heading, scenes of these two are filled with Kentucky Fried Chicken, Coca-Cola and cocaine. A second couple steeped in over-the-top pre-modern garb and beliefs represent the more traditional, superstitious segment, detached from and oblivious to the culture of the larger cities. A third couple is depicted as more educated or “sophisticated”, yet whose reliance on technological doo-dads and sense of inferiority make them glaringly deficient. A pair of bumbling guys represents the penchant for bullying and a fascination with Japan’s renewed involvement in military action under the guise of the Self Defense Force (SDF). A fifth perspective is found in the young and seemingly retarded youth who after his first taste of debauchery and drugs commits himself wholly to his own brand of staunch and bloody Nationalism, hearkening back to 1930’s pre-War Japan. The remaining character is that of a foreign-born homeless man which director Sano plays himself. Though virtually speechless and abused by nearly every other set of characters, he can arguably be said to represent the film’s moral message.

This film was released in 1992, just as Japan was still considering the creation of its “Self Defense Force”, a militaristic body which would aid in global peacekeeping and war. To many in Japan, this (re)turn to military activity was highly distasteful and was viewed as a “get paid to kill” scenario. Sano’s film addresses this issue head-on, as well as deconstructing other social options including Nationalism and isolationism. It also confronts what he sees as the corrupting influence of Westernization when stripped from any traditional (common sense) morality.

There is indeed a lot going on in this film in addition to, perhaps even in spite of the MANY sex scenes. In my opinion this is an excellent example of how in the hands of one of the “Four Kings” a pink film transcends its sex-centric genre and leaves audience thinking about far more than nipples and sex positions.

A bored and rebellious couple opt to steal a car and head to the countryside to visit some relatives, among whom is an adolescent boy who suffered brain damage as a child. After a brief visit filled with hot tubs and sex, the couple heads back to Tokyo, bringing with them the boy with the intent of showing him the big city and broadening his exposure to the real world.

But the boy’s visit is quickly filled with inedible fast food, sex and drugs, all of which send him into a moral spiral which soon has him yearning for a thorough purge of Japanese society. Taking things into his own hands in his desire to rid Japan of corrupting influences, he embarks upon a crazed blood-letting which eventually leads him back to his home town.

This film is wholly recommendable as representative of the unique brand of pink film produced by the Four Kings/Devils of Pink. It is chocked full of sexy writhing and copulation (and cucumbers!) yet contains a ideologically-driven storyline which easily takes precedence in the watching and memory of the film. I am confident that after watching this, you will understand why and how director Sano quickly earned his reputation as a different breed of pink film director.

This film was recently released in Region 1 and is accessible via mainstream venues. The DVD contains a couple interesting extras, including an interview with director Sano Kazuhiro regarding his intent and thoughts with this film.

Interesting exemplar of the unique pink films produced by Four Kings/Devils of Pink.

Fairly strange tale which will leave you plenty to think about afterward.