When a bizarre hair fetishist stumbles upon an eery corpse sprouting metric tons of hair, he euphorically shares his bounty by selling dark snippets to eager salons throughout the town for use in increasingly popular hair extensions (or as the Japanese call them, “exte”). Little do they realize that a malevolent retribution is meted out upon anyone coming into contact with the slithering locks of hair, possessing their scalps in a most hair-raising fashion! 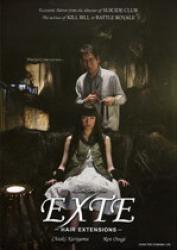 EXTE is the latest (2007) film by director Sion Sono, whose 2001 Suicide Circle gained him an international notoreity in cutting-edge contemporary horror and social commentary. The six films/productions he directed in the interim of these films have NOT been in the horror genre and only with EXTE has he returned to mainstream limelight and box office success in Japan. For both Suicide Circle and EXTE, Sono served as both director and screenplay writer. In EXTE however, he co-wrote the screenplay with Misaki Adachi whose work as assistant director you will recognize from major J-Horror films such as Juon 1, Juon 2 and Dark Water (the original Japanese version). Adachi also wrote the screenplay (along with director Takashi Shimizu) for Rinnu (Reincarnation) which was recently released in Region 1 DVD format to mainstream US markets.

The cast includes a couple big-name stars from the J-Horror genre including Chiaki Kuriyama (whom you know from Shikoku, MPD Psycho, Battle Royale, Mail, Kill Bill, etc.) and Ren Osugi (Cure, Charisma, Uzumaki, etc.) . This star talent alongside the talent of the directorial and writing staff makes for a a rather effective and creepy tale.

Tokyo port authorities discover several cargo containers from China filled with the corpses of young women, victims of the cruel and illicit sale of human organs. An autopsy on one young women defies explanation as her entire body cavity is filled with long strands of hair. One of the morgue workers (Ren Osugi) holds a secret fetish for womens’ hair which drives him to steal the corpse and hide it away in his (very hairy) apartment. Within a very short period, and to his great delight, he finds that the young woman’s body continues to grow huge, flowing amounts of hair, which he lovingly snips from her and enthusiastically sells to local hair salons for hair extensions, a relatively new and booming trend.

In his daily rounds to pawn the hair, he comes into contact with Yoko (Chiaki Kuriyama), a young and aspiring salon apprentice whose own hair he immediately falls in love with. Out of giddish generosity, he offers Yoko and her fellow workers several free samples which they gratefully accept. It is not long, however, when they all begin to realize that something hoary and horrible befalls everyone who comes in contact with the hair. Only the morgue worker, who devotedly adores his new hair-sprouting guest seems impervious to her furry curse.

Ren Osugi is a master of outlandish characters and here he lives up to his reputation as the flamboyantly dressed, wig-wearing, cadaver-adoring hair fetishist. His creepiness is matched only by the diabolical writhings of ghoulish hair which will have asthmatics and furr-ball-phobes in high gasping alert. If you cringe at the thought of swallowing a single LONG strand of someone else’s hair hidden in your sandwich, BEWARE! This film has oodles and oodles of hair: mouth fulls, head fulls, and room fulls!

The effects are not exactly “spectacular”. There is very little in the way of CG effects, and cinematic effects involving actual hair prevail. But still the point of creepiness comes across. You will be surprised to learn how destructive mere hair can actually be when it has a malicious mind of its own. An epic youkai/monster film I here suggest be created is one which pits the Blob against this Hair Monster in a fight to a brilliant finish and sheen!

There is a lot of cinematic mood and experimentation here which lends to the tale’s overall effect. The claustrophobic confines of the morgue worker’s Hair Palace is an excellent example. The characters are also well done and there are several which will have the audience praying for karmic retribution (and their prayers shall be answered!).

Hair-splitting insights aside, I found a deeper message to this film, somewhat akin to that underlying Sono’s earlier Suicide Circle. The message seems to target society’s trend toward superficiality wherein the ultimate cost of beauty, health and longevity may indeed involve the misfortune of others. Our ghoulish Rapunzel does not discriminate between those who harvested her organs and those who harvest her hair at her expense. Violent fates befall both groups as if both at core are engaged in the same thing; Namely, the use of one unfortunate life to better the life of another. Of course, the notion of hair extensions is undoubtedly far less abhorrent than illegal organ trade, but this line of distinction is precisely what Sono seems intent on blurring. And by doing so, he effectively pinpoints the vacuousness of this social trend in contemporary Japan. (I am suddenly wondering if there has been a similar movie involving killer Breast Implants.) Of course here, as in Suicide Circle, Sono’s message is buried beneath a thick layer of cringeful narrative. But despite the significant differences in the two films, his personal flare for social commentary remains perceivable.

And lastly, when this film’s storyline leaked out before its release, there was plenty of comedic buzz about the ridiculous notion of haunted hair extensions. I for one expected this to indeed be a wholly ridiculous enterprise. But while the film is intentionally funny at points, particularly regarding Osugi’s character, the “guffaw factor” is actually quite low. There are plenty of horror tales revolving around the posession of body parts such as Bruce Campbell’s rogue hand or the film “The Eye” whose remake is being released in US theaters soon. As superficial and nonsensical as a haunted hair extension might seem, it is depicted here, rather effectively I confess, as a legitimate and malevolent factor in the transmission of this curse.

As of this writing EXTE is not yet available in any subtitled format, but I expect it will be “heading” your way soon!

Plenty of cadavers on display, but most of the “gore” is implied and off-screen.

The only passion on display here is between Ren Osugi and a mountain of hair.